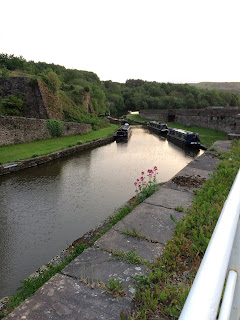 Although I like going places, I don't like sitting for hours and hours in the car with no breaks, so when we're travelling anywhere over a longish distance, I'm on the lookout for places to stop and walk round for a while. Going to and from Manchester, we've often driven past a roadsign for Bugsworth Canal Basin, near Whaley Bridge, and I've had it in mind as a place to investigate - and at last I have. 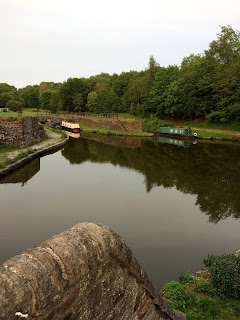 I'd no idea whether to expect a modern marina, with shops and restaurants, or a more practical 'yard' for cleaning and working on boats. It turned out to be neither. Instead it was a fascinating glimpse into transport and industry in the past. 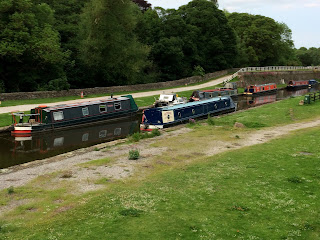 In the 1890s up to 80 boats a day were loading with limestone to be transported through the canal network for use in roads and as fertilisers. There are remains of lime kilns at the side of the canal basin, tracks still marking where the tramway ran bringing stone to the barges, and reconstructions of the bridges the barge-towing horses used to pass over the canal. Today though it's hard to believe it was ever that busy!