A Night At The Theatre - Oedipus

For me, Steven Berkoff will always be the evil villain Victor Maitland from Beverly Hills Cop, so when I saw a few years ago that he was directing a stage adaptation of On The Waterfront at Nottingham Playhouse, I went to see it mainly out of curiosity - and was amazed!! Imagine my excitement then, when by a lucky fluke, I won tickets to see his version of Oedipus there last week!
Coming from down the road in Derby, we're not used to much in the way of traffic jams but even so, were rather surprised at how busy Nottingham was on a weekday evening and began to wonder if we really had left plenty of time for getting to the theatre. It turns out everyone was going to see Justin Bieber - why did he have to pick this night of the year to be in Nottingham?

Anyway, on to more interesting things than Bieber -

I've not seen Oedipus performed live before so wasn't sure what to expect. I've read it and I think I may have seen it on TV a long while ago with the main characters standing stiffly delivering their lines and the Chorus coming in en masse but imagined that Berkoff's presentation would be very different.
From start to finish I was spellbound - as were most of the audience, though unfortunately not the gossiping woman behind us. I'd wondered if the play would be changed or reworked away from Sophocles' original but apart from some updatings of language it remained the same - 3 main characters, various messengers and the chorus.
It was presented on a very minimalist set - a long table and bench were all the props. Simon Merrells, Vincenzo Nicoli and Louise Jameson were excellent in the main roles of Oedipus, Creon and Jocasta (the presentation of Jocasta's hanging was eerily realistic) but the Ensemble, as Chorus, were the real show stealers, bringing the main characters' words to life. It's difficult to describe what they do. I suppose 'mime' goes someway to covering it - whether depicting horses rearing or frozen in tableaux listening to the messengers recount their tales - but doesn't fully cover the impact they had on the whole performance. The eye putting out scene at the end was horrific despite Oedipus' back being to the audience - the reactions of the Ensemble really said it all! I gather that they're a general feature of Berkoff's theatre productions and saw a review of Waterfront basically saying 'Oh no, not again'. Maybe some love them, some don't. If so I'm firmly in the 'love them' camp.


If I had one criticism, it would be the lack of interval - how one could be fitted in I don't know but by the end of the performance I was feeling stiff and cramped.
Posted by maryom at 09:13 No comments: 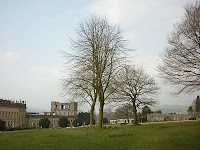 Chatsworth again last Sunday. Gardens are now open and full of daffodils and budding rhododendrons but our main reason for heading that direction was to visit the 'Fauna' exhibition at Gallery Top, Rowsley, specifically to see paintings by Catherine Hyde. I've seen the gallery many, many times, waiting in the traffic jam leading to the A6 junction but never been inside. I was pleasantly surprised at first as the exhibition space is much larger than you would expect from the exterior but as I started to look around, I realised it wasn't well laid out.
The 4 paintings we wanted to see weren't hung together and one was almost behind a wrought iron spiral staircase! I particularly liked this one but couldn't really see it as it was necessary to either stand too close or peer through the stair treads.
There was a large jewellery selection and lots of ceramics as well - hares, a woman-hugging polar bear and some owls I rather liked. The Teen had her own preferences, of course.
Didn't buy anything but it was nice to get to see some of Catherine Hyde's work again - possibly our only chance for a while unless I can persuade Hubby to take me to Art in Action in July.
Posted by maryom at 23:02 No comments: