Last weekend I was out and about in real life - to Cromford for a short walk along the canal - but the rest of the week I've sat in my armchair (well, technically, at my pc) and travelled much further with the help of Google Streetview.

To my mind, Streetview is one of the most exciting things on the web - far better than cute cats! I've always found maps fascinating but actually being able to see that map come to life, to walk down a street, climb a mountain or stroll by the sea is wonderful.

When Streetview first launched in the UK, I used it to look at our house and road, have a peep at friends' houses maybe, or check out directions, but I soon expanded my horizons to include places I'd been, or was thinking of going, on holiday (It's excellent for checking if your hotel really does have a sea-view). So I spent a lot of time wandering round, say Edinburgh or St David's, places I'd already visited. At first it was only possible to move around on actual roads but now in some areas, you can follow footpaths, catch a boat trip or maybe just check out an out-of-the-way viewpoint through a 360 degree 'photo-sphere' image. Through a combination of these I've dropped in on the summits of Ben Nevis and Snowdon, not quite managed to climb Everest but did walk up a Himalayan valley to a glacier, ambled along a coastal path carved into the cliffs in Italy's Cinque Terre region, taken a gondola trip through Venice, a boat up Loch Ness ... as you can tell, I spend quite a lot of time 'travelling' in the virtual world.

My most recent 'adventures' have been inspired by books I've read.
I've explored the North Norfolk coast, setting for Elly Griffiths's forensic crime series 'starring' Ruth Galloway, and then, while reading Anne Enright's The Green Road, explored the Burren National Park, Eire, with a slight side-track when I discovered the 'Father Ted Parochial House' marked on the map.

My most exciting 'trip' though was trying to follow the journey described in Dan Simmon's The Terror following an ill-fated expedition searching for the North-West passage through the Canadian Arctic. - so I had to go and investigate! The weather was a lot sunnier than I expected with hardly any snow and ice (Google does seem to send photographers out only in summer, though) and the landscape far more varied - I found deep river gorges, waterfalls, chains of islands forming lagoons along the coast, as well as the flatter ice-worn aspect I'd expected. I took a boat trip round Pingo National Park (find it at Pingo Canadian Landmark) and, as some photo-spheres are taken inside buildings, I ended up inside an airport reception area, and a store selling everything from bananas and Cadbury's chocolate to bikes and guitars! I then headed back to Greenland, a stopping off point for Arctic exploration ships, and a boat trip round Disko Bay, followed by a walk near Ilulissat to see a glacier breaking off into the sea. There's no way I'd do any of this in real life!

Now I'm wondering where to travel to next ... I've been watching Planet Earth 2 so I might try and track down some of the locations... 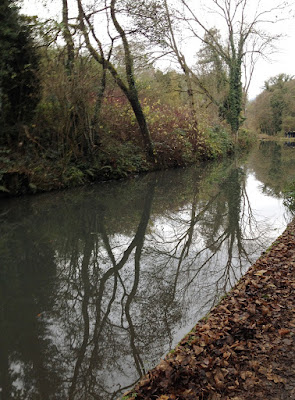 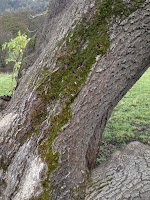 With a comparatively warm day (for the time of year) we decided to head out to Derbyshire for a short walk - flat, undemanding and dry underfoot. There's a variety to choose from with various old railway lines but alongside Cromford Canal is one of our favourites. 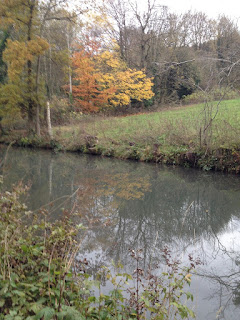 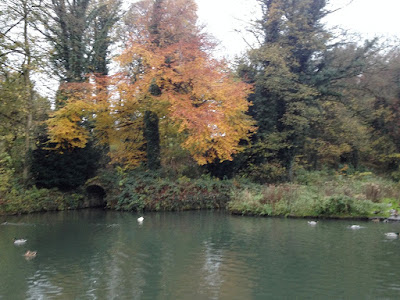 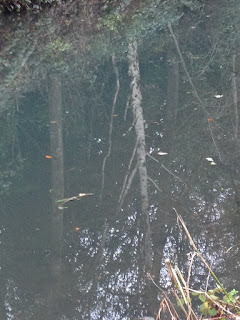 Despite the flaming orange leaves of a few beech trees, the overall feel was monochrome. It's a time of year to admire the texture of tree bark, and gaze at reflections in the still water. 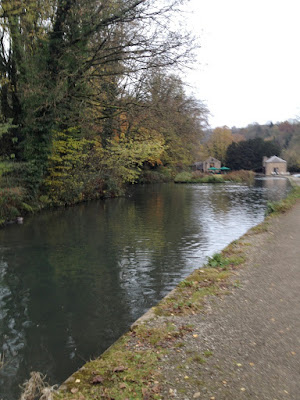 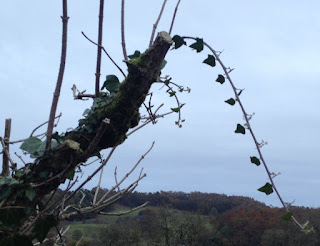 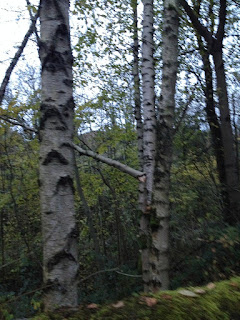 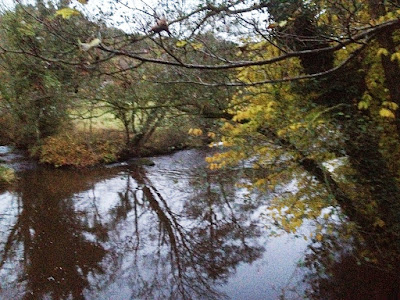 Life on the Road - Joe McCorriston

Over the past year, through the touring musicians that have come to stay, I've grown to realise that their lives have very little in common with the pop stars we see on TV or in the tabloids. Joe McCorriston has become one of our most frequent visitors, stopping off for the night after playing in local pubs, before heading off somewhere new the next day, so when he was last passing through I decided to ask a few questions ... 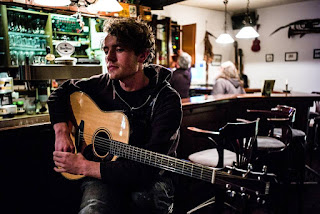 Firstly, could you briefly introduce yourself ...
I’m Joe McCorriston, a Singer/Songwriter, most of the time armed with an acoustic guitar. I’m completely independent and I spend the majority of my time travelling around the UK & Europe playing gigs to strangers and sleeping on friends floors (and a bed now and then).

I think the image that most of us have of pop stars is of partying and clubbing all night, travelling everywhere in limos and jet-setting off to exotic holiday locations. I’ve found out over the past year that that’s far from the reality of most musicians ...  What’s it really like?
Haha, what you just described is pretty much the complete opposite of the reality. Maybe that is the case for famous, rich, pop stars. But no, for people like me who are without a record label and any real backing, we have to work as hard as we possibly can to play as many shows as possible, despite barely getting paid. I have recently learned that it really is an important factor to take care of yourself and your body when on tour, or else you will burn out and your performance won’t be as strong as it could be. I limit myself to 1 or 2 “mad” nights on a normal length tour now, I make it a special occasion. Then I still regret it the next morning when I’m hungover on a packed train!

As a professional musician you seem to be on tour almost permanently. What’s been your longest tour?
My longest tour in terms of days, was 18 straight days without a day off, on a tour I did with a guy called Gaz Brookfield in November 2013. In terms of distance, it has to be the European tour I did with David Kay in May of this year (2016). I have no idea how many miles we did, but we did a lot of travelling. A lot of the time we had 4 to 5 hour train rides every day, I booked the tour and I was really struggling to book the gigs, so I was in the frame of mind to just take any gig we could possibly get. This resulted in the tour routing being rubbish. So much travelling! It was a great tour, but it really burned us out.

Do you have favourite places to play?
I have a few, I really really love playing in Hanover, Germany. There is just something about that city. I also love playing in Nottingham, it seems to be a great show every time I play there. Where else? Lancaster, my hometown of course. Glasgow is also special to me.

What do you enjoy most about touring?
I love being able to play my songs every night for a period of time, it really is a crazy thing to do and it makes me happy. Touring is also a great way of catching up with friends around the country who I wouldn’t see very often otherwise. When I’m touring, I see them 4 or 5 times a year. If I didn’t tour, I’d be lucky to see these particular friends once in a year.

And the worst bits?
Empty rooms, unpaid gigs, loneliness, self deprecation when no one comes to watch you. The feeling of pure emptiness (it happens!), and feeling like everything you are doing is pointless. “I’m literally travelling around, making some noise in to a microphone every night, why would anyone care about that?!”

What can venues, promoters, and fans do to help and encourage independent musicians such as yourself?
It’s a tough one. I’m not sure what more, venues and promoters can do. They are always getting a bad name for exploiting acts and not paying them enough, but the reality is that promoters aren’t exactly rolling in the money either. Promoters and musicians are very often in the same boat. Obviously you do get some bad eggs (pay to play kind of promoters), but people do need to think about the reality of the job a bit more.
Fans, and punters in general could do a lot more. It’s plain and simple, more people need to go out and enjoy live, original music. But people are scared, they just won’t do it. They are afraid of something they don’t know. They want cover bands and tribute bands, because it’s a guaranteed night of something they are familiar with. I’m not sure why, because every time I’m sat there watching a new original act, it excites me. Who knows what you are about to hear? It is so exciting, there are endless possibilities. Sometimes I drag friends to come and watch an original act that they don’t know, and they leave delighted that they came, even with some of the acts merch sometimes. But then, they won’t go again until I have to drag them out again! It’s some sort of mentality that people, and the UK crowds in particular, have. If they haven’t heard of it, if it’s not on the radio or the telly, then they are sceptical and they won’t want to waste one night of their precious lives, taking a chance on an unknown act, that might just well change their lives.

What are your immediate plans? Some quiet down time or back out on tour?
I’m at home for a few weeks then I have a small run of dates, then home for a few weeks again then another small run in December. But nothing much until the end of the year. Once 2017 hits I will be on tour more often than not for the whole year. It’s going to be heavy and I can’t wait to tour my new album.

That album will be out in December*, but meanwhile you can find Joe in all the usual places - Facebook  Twitter  Bandcamp, and Spotify - and on his website. Have listen to him, and maybe next time he's in your town go and see him perform! 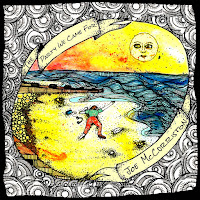 *with a little bit of luck, here's a link -
https://joemccorriston.bandcamp.com/album/the-party-we-came-for