The Seagull at Derby Theatre 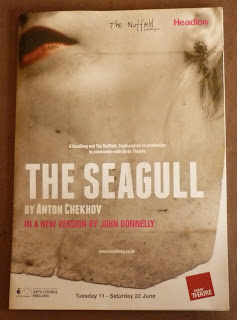 Surprisingly this is the first time I've seen a Chekhov play performed 'live' - I've read a lot of them and seen quite a few on TV but never live and to a certain level I'm 'right familiar with Chekhov' just like the heroine of Educating Rita. Maybe there's a feeling that Chekhov is too hard or irrelevant for today, I'm not sure, but when I saw our local theatre were producing The Seagull, I thought it was time to take the plunge. A little conferring with my ex-drama student elder daughter, confirmed my suspicion that The Seagull was one of those Chekhov plays about thwarted ambition, set in the countryside and in which everyone desperately wants to go to Moscow  - this is a bit of a family standing joke, so I nearly burst out laughing when one of the characters started talking about needing to go to Moscow!
Anyway, it turned out to be a very enjoyable evening. The cast were great - and included one of our favourite 'locals' John Elkington who we last saw in Of Mice and Men at Nottingham Playhouse. My only quibble would actually have been with Chekhov himself - I would have ended the play with the dramatic off-stage gunshot, but then I'm not a famous Russian playwright.


This production of The Seagull was a co-production between  Headlong Theatre, The Nuffield, Southampton and Derby Theatre.
Posted by maryom at 16:37 No comments: 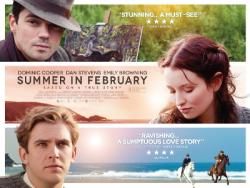 "A true tale of love, liberty and scandal amongst the Edwardian artists' colony in Cornwall."

Florence Carter-Wood, an aspiring artist, joins her brother Joey at Lamorna Cove, in the far west of Cornwall, home to a group of bohemian artists. There she meets the charismatic, womanising painter AJ Munnings and his close, but far more reliable and steady, friend Gilbert Evans, the local land agent - and is attracted to both.
This is the starting point for a moving love-triangle story set in the early 1900s against a backdrop of raging seas and quaint Cornish villages. Summer in February is beautifully shot in and around Lamorna Cove using the actual places where these artists lived and worked; the costumes are lovely, the scenery wild and dramatic and every scene beautifully lit but it's much more than a quaint period drama - an intense exploration of tangled relationships.
There's great acting from the whole cast, especially the leads - Emily Browning, Dominic Cooper and Dan Stevens - but it was Cooper's performance as AJ that really stood out for me. Although I've seen him elsewhere, I mainly think of him as Sky from Mamma Mia so the depth and breadth of his acting surprised me. Proves you shouldn't judge a man on how well he can sing dressed in swimming trunks!
A great film on lots of levels. Whether you love Cornwall, period drama, romance, 'true' stories or all of them it ticks so many boxes. I saw this courtesy of free tickets on Sunday. Monday morning another ticket offer arrived - and I nearly went to see it again! If anyone offers tickets for next week, I'll be there like a shot!