Here we go again ... off out gigging

I've had rather a long Christmas break with NO going out, so here we are almost through January and only on the first gig of the year - though when you consider that this time last year I barely went to gigs, that sentence alone shows how much my life has changed!
Anyway, on Saturday evening I went to Nottingham to see a young local rock band - As December Falls - playing their biggest gig to date, at the Rescue Rooms. I've been listening to them on Spotify and such for a while (they've got rather a Paramore sort of sound, if you want to check them out), but never had the chance to see them live before. 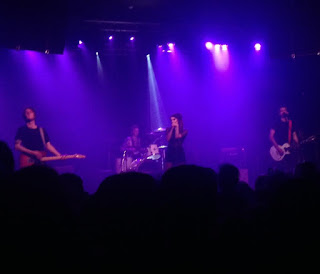 There were four support acts but we only arrived in time to see the last one - Hello Tomorrow with a half hour set. They've an interesting sound and are another band I'll be checking out again.


And I had to treat myself to some merch. Although it will get worn before, I think this will make a brilliant Christmas t-shirt for next December! 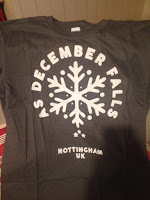 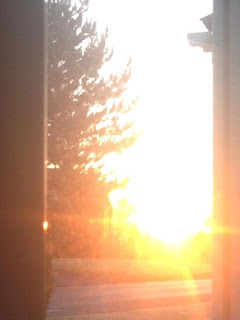 Today the sun appeared for the first time after a week or more of damp, dreary, dismal drizzle, so I decided it was time for a little pottering about in the garden and 'me' time.

I had some practical things to do, moving plants around in the greenhouse to keep them clear of icy glass, checking the bird feeders, and planting some iris bulbs bought earlier this week
but then I took time out today to really look at things that on a 'normal' day I'd give little or no attention to. 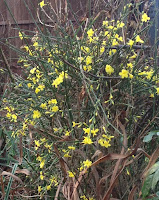 At this time of year, the only obviously flowering thing is the winter jasmine 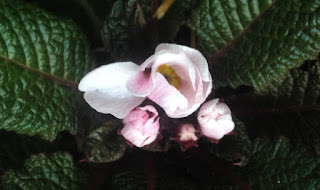 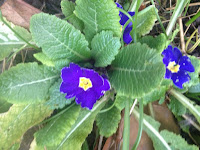 but, almost hidden by leaves and twigs, the polyanthus are starting to flower, and daffodils and snowdrops pushing through. 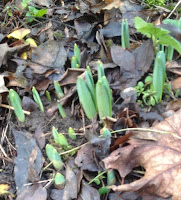 I also spotted some less obvious signs of Spring-on-the-way; rhubarb starting to grow (though sadly pecked at by birds), new leaves on the flowering currants and a couple of forsythia flowers (which reminded me that it's time to bring some branches inside for forcing)

Wandering round the garden like this, taking note of the subtle changes, is something I used to do every day, generally first thing after taking my daughter to school and before starting anything else, but since the school run came to an end (nearly ten years ago!) I've dropped the habit. Now's the time, I think, to bring it back. It fits in with a couple of my New Year resolutions - spending more time in the garden, and gaining a few moments of 'me time'. It may not really qualify as 'mindfulness' but to take time out and just LOOK was so relaxing, especially on a sunny day, and cleared a lot of the thoughts that seem to constantly buzz round my head. I was almost tempted to try sitting outside for lunch, but it wasn't sunny enough for that ... it
soon will be though!

Following the success of last year, I'm becoming more convinced of the power of making resolutions. Somehow because I've written them down, and declared to the world what I intend to (at least) try and achieve, I feel more committed to actually doing something.
Another thing which helped last year was going back to the original post, checking my intentions, and seeing how far I'd succeeded, or not. Also if there was something I hadn't started before, say, March, I didn't abandon all hope but tried again.


First up this year has got to be get fitter and thinner. After last December's Frank Turner gig my legs ached for days due to all the jigging about. Walking round Shipley Park recently, I felt decidedly unfit, puffing and panting up the hills, and even on the flat couldn't keep pace with the teen. So I need to do something positive about it. Also, as a financial incentive, I have a wardrobe full of too tight clothes waiting to be worn once I shift some pounds, so although my main aim is to be fitter, thinner will be an added bonus. This is a resolution I've already started on - at first I said I'd join in with a couple of zumba sessions a week with my teen, but despite how exhausting I found the first 5 minute one, I'm now doing some every day. I haven't lost weight yet but do feel lighter on my feet. So far, so good ...

Re-discovering myself - Over the past few years I've let a lot of things drift. I used to spend a lot of time gardening, knitting, making clothes, pottering (not very seriously) at painting and textile arts, or trying other crafts from lace-making to tie-dying, but somehow I've let all of them slip. This year I intend to get my old habits back. So ... 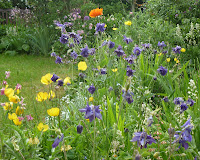 - Gardening and growing - I've always been a keen gardener, growing both flowers and vegetables at home, but since we've had an allotment I think I've come to see it as more of a chore than a pleasure. This year I want to make more effort with the garden - grow some new flowers from seed, make the veg patch productive again, and, as a side effect, spend more time outside. 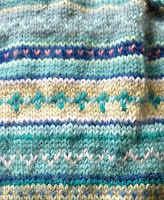 - Knitting and sewing - again, hobbies that I want to take up again. I have lots of wool stashed away in cupboards and drawers, so ought to be able to find some to knit up! Before Christmas I went out and bought some cord material ready to make a new winter skirt in a style I liked - so it's actually time I got on with it.

- I also want to find time to explore more 'arty' things. Early last year I spotted Sarah Salway's A Year of Artists Dates - in which she was taking an hour out each week to do something art related - and this is more or less what I want to do. I'm not quite sure how or when though.

Moving in a different direction - just before Christmas I started an on-line language course, well, two actually - Welsh and Swedish. This was about the time that Swedish thriller Modus was on TV, and I was so impressed with being able to recognise some of words that my aspirations have grown. I've now added Danish to my list, with the hope of being able to partly follow both sides of conversations when The Bridge returns.

I intend keeping up last year's resolutions - de-cluttering the spare room went so well that I want to tackle the whole house, but more importantly I want to carry on exploring new things and building a social life of my own - yes, that probably means more nights out at gigs! 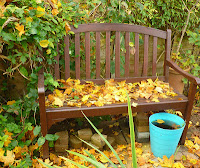 In between all this, I'd like some down-time for me. There's no set timetable to my days, and so late breakfasts run into long lunches and straight into early evenings. I seem to always be doing something, but at the end of the day it's hard to see what it was. I want to be organised, get household chores done, spend time on more creative projects, and then have time to sit and think or relax in the sun (when it arrives). 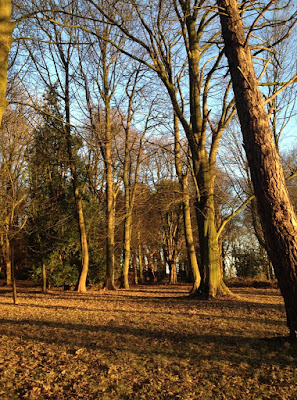 Monday was a lovely, sunny, almost Spring-like day, and, as it was the last day of her Christmas holiday, the teen decided we should do something rather than just laze around (yes, that would have been my plan!). 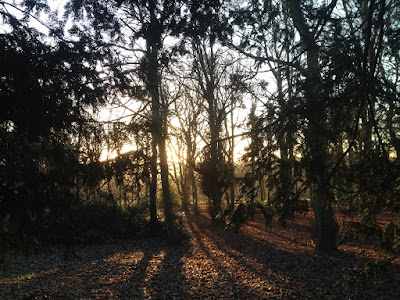 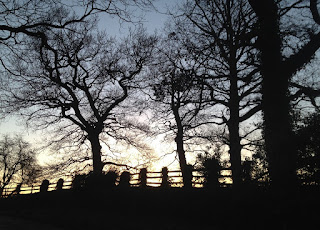 In the spirit of trying to get more exercise this year, I agreed, but found that after so many idle days, and so much Christmas food, it was a harder walk than I expected. Fortunately, getting out of town, and the stunning sunset made up for the exertion, but I must make time for more walking this year. 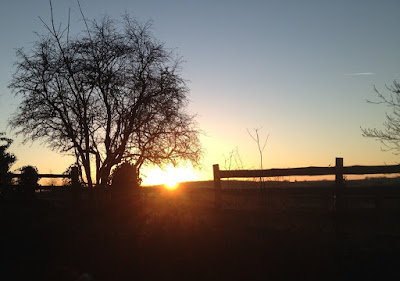 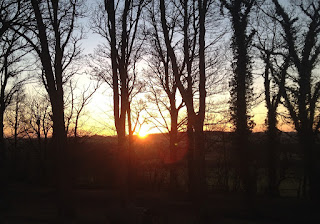 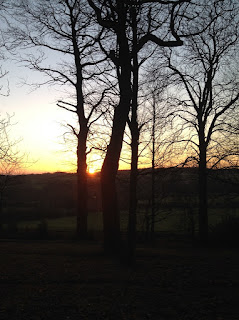 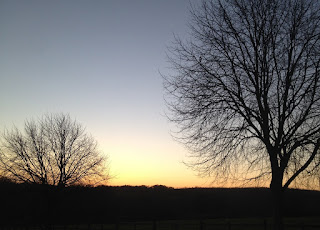 Highlights of 2016 - What a Weird and Wonderful Year!


Any year has its ups and downs, and this year certainly hasn't been without the 'downs', but for me it's also been a year filled with new, exciting things.
One of my resolutions last January, among all the mundane stuff, was to 'get a life' - interests, movies and music of my own, not just 'borrowed' from my children - and it's taken me to some strange places.

I've been to more pubs this last twelve months than in the previous twelve years. 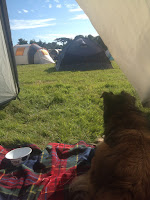 I went camping, and it was much more fun than I expected.

I watched my Breaking Bad box set on my own, because the rest of the family weren't interested, and I loved it.


I went to my first festival, Curious Arts at Pylewell Park, where over two days I caught half a dozen full author events and dropped in for a few minutes on more, then listened to great music at night.

Before this year I hardly seen any live music. This year I've seen over thirty musicians  at various venues, starting with Thom Worth and Tim OT in a Beeston pub in February and ending with Dave Giles in Burton just before Christmas. In between I've seen Lancaster singer/songwriter Joe McCorriston FIVE times (because he's always on tour), Elly Rose, Skinny Lister and Billy Bragg at Curious Arts, Skinny Lister again at Nottingham's Bodega and (sorry everyone else, but this has to be the highlight) Frank Turner's sold out show at Nottingham's Rock City. This time last year, I could barely imagine doing any of this and certainly believed I was too old, but it's been amazing.

I went to the Lara Croft 20th Birthday exhibition at Derby Quad, played with ancient and state of the art games, and discussed gaming techniques and Lara Croft's evolution with an actual professional gamer (!)

I learned how to drive again - I hadn't actually forgotten but I haven't driven for years and had got out of the habit. Now I'm back to a certain level of confidence on the road, and can happily fetch the teen from the train station or where-ever.

I've met lots of new people through offering a bed/floor to touring musicians. Throughout last year, starting with the people I'd met through my teen's promotions, and expanding through friends of friends, I had folk dropping by to spend the night on a dodgy inflatable bed or a pile of sofa cushions; some visit once, some have become like extended family, and particularly notable was the night a band was let down by their promoter and, being desperate for somewhere (anywhere) to stay, drove up from Southampton and turned up at 4am!

In between all this I went to bookish events - author talks, the launch for Alison Moore's Death and the Seaside, a forum on the future of independent publishing - gardens, theatres, Sotheby's annual sculpture exhibition at Chatsworth ...

and followed my teen's adventures - heard her on the radio, seen her on TV, watched her play in pubs and clubs, and, possibly the weirdest half hour of the year, saw her sharing a political platform with Jeremy Corbyn.

Looking back, it seems to have been an extraordinary year. I'm not sure how 2017 can improve on it but I'm hoping it will.