Art in Action, held at Waterperry House near Oxford, is an event I've heard a lot about but never got round to visiting due to the travelling distance. We've often visited galleries or artists in their studios but nothing on as large a scale.
Anyway, this year we decided to go. Tickets were bought well in advance - not something I often do as I'm always too concerned about the changeability of English weather and my inclination to change my mind at the last minute but there were good discounts to be had for early booking - and we were all organised, ready to go on Saturday. BUT, midweek our dog fell seriously ill, probably from drinking pondwater, and everything was put on hold. On Friday it didn't seem at all likely that we'd be going but fortunately the tickets were for any day of the event, by Saturday morning Dylan the dog seemed well on the way to recovery and we started to tentatively put together a plan for Sunday.

We were all up and about at an hour that we don't normally manage even during the school week, Dylan taken to spend the day with grandparents and we were off!! Not a lot of traffic on the motorway - Sunday after all - but first a warning for 'debris on carriageway' and then the more alarming 'oncoming vehicle' sign! Oncoming vehicle! On a motorway! Fortunately we didn't meet it and arrived safely at Waterperry House a little later than we'd hoped but still 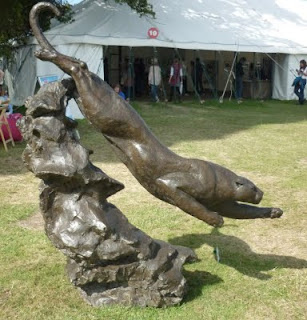 with most of the day ahead.


I'd been told how much there was to see at Art in Action but was still amazed at the space occupied by all the tents and marquees.

We wandered round pretty much randomly at first - past the beekeepers' tent, round the International art section - with amongst other things some stunning brightly coloured tapestries from Peruvian textile artist, Maximo Laura - then the painters, printers and calligraphers sections - till we found one of my favourite artist/illustrators, Jackie Morris, surrounded by her paintings, books, badges and bags. I've met Jackie, a generous welcoming lady, several times before - though nearer to her home in Pembrokeshire. 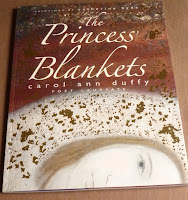 e next person we wanted to visit was someone she'd introduced me to on Facebook - Catherine Hyde - and whose work I'd tracked down in a Penzance gallery but never met. I'd happily have come away with any of her dark dream-like paintings but restricted myself to buying a book with words by Carol Ann Duffy and wonderful illustrations by Catherine.


Onward then to watch Karen Green demonstrating how she shapes her wonderful copper weathervanes and Liam Reeves blowing glass and showing how goblets are made. Through the textiles and woodwork tents to ceramics where I discovered the deceptively simple but wonderful pots of Charlotte Jones 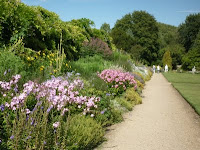 Just time for a quick walk round the gardens with their stunning herbaceous borders before we headed home past some rather unusual vehicles... 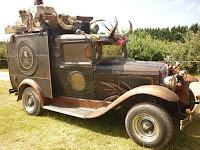 A brief post provoked by a question from @EdinCityofLit on Twitter earlier this week about favourite Scottish reads. Now, on Twitter you've got about 10 seconds to think of something clever or amusing, or even preferably both, to say. So briefly hunting round my brain I picked

and then watched as everyone else came up with more sensible ideas - Kate Atkinson's Case Histories series, The Prime of Miss Jean Brodie, anything by Alexander McCall Smith....

The Crow Road - yes, it opens with an attention grabbing sentence about the narrator's grandm

other exploding but what makes this book stand out for me is the almost fictional landscape that Iain Banks creates. Some authors set their books in places recognisable to their readers; some create a totally imaginary setting: in The Crow Road the two meet. Many of the places are real and the fictional ones wrap round, under and over them (mirroring the relationship between life and fiction). Go to Crinan (a place I knew before reading the book) and you can visualise where Gallanach must be - you can imagine a viaduct crossing Loch Fyne at Minard - and heading back towards Glasgow, you'll drive carefully in case that fatal litter bin is still there! Stand at Crinanferry and you can visualise an alternative world where Upper Loch Crinan is a deep water port rather than mud-flats barely covered at high tide, where a bustling town with docks and glass works grew up on its banks, maybe peopled by folk just like Prentice McHoan and his exploding grandma!
People often ask about novels that have impacted on readers lives and in an immensely trivial way this has - every time we drive on the motorway, I encourage my husband to try Ashley's trick of crossing from one lane to the next without hitting the cat's eyes!

All Fun And Games Until Somebody Loses An Eye - an action-packed comic escapade that I happened when talking about it recently to liken to Charlie's Angels. So w

hy put it up there in favourite reads? Because of the heroine, Jane Fleming - who's led a life of dull propriety until she suddenly finds herself plunged into a world of fast cars, designer clothing and international espionage worthy of a Bond girl. But Jane is no young bimbo - she's a 46 yr old granny! After years trapped in dull routine, she has the chance to break out of the mould her family have cast her in, to live the life she always wanted and prove that age is no barrier to having fun!

Bloodstone - cheating a bit to include this as it's not published till August. I've recently read a proof copy and found some of its passages the most harrowing I've ever read. Gillian Philip is not an author to let her characters, or her reader, off lightly and there's no pulling of punches when it comes to making them suffer. When you think the characters have all the emotional and physical turmoil they can stand - there's more to come! I'm not a person to sob my way th 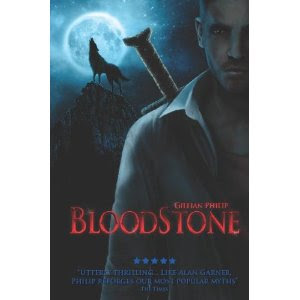 rough any sad parts and tear-jerkers don't normally work on me, but at a certain point while reading, I called a temporary halt - put the book in the freezer for a while, as Joey from Friends does - because it didn't seem right and proper to carry on without a pause, so much was I involved with the characters, their pain and grief.


So, there we go, my favourite three Scottish reads - certainly the three that sprang to mind quickest.

What would you pick?
Posted by maryom at 18:05 No comments:

A Spooky Thing Happened On The Way To The Wood

I've been walking the same route now, almost every morning, for several years - Up past the playing fields and round the little wood with open views to Derbyshire at the far side. At first I walked alone, then with husband and/or Dylan the Dog. Many friends thought it was strange, if not downright dangerous, to walk unaccompanied but I've never felt worried or threatened by it till this morning.
Just Dylan and I went today and as we walked up the field he was playing his normal games pretending to throw and catch his ball on a string and generally sniffing here and there and bouncing about.
Then... a man walked round a bend in the path quite a way in front of us and Dylan immediately came and walked "at heel" by my side, keeping his eyes on the man approaching us. Now, Dylan will walk "at heel' when told to, or at the end of a walk when he's finished romping, but to stop in the middle of his games and behave this way is unusual. There didn't appear to be anything odd about this man - he was probably just someone using the field as a short cut from shops or leisure centre to his house - but Dylan came to my side as if to guard me, which was bizarrely worrying. Had he picked up some vibe from this man that I hadn't? Did he remind Dylan of someone from his past before he came to us? Usually when we meet dogs that Dylan dislikes he detours from his route to avoid them - and the same has happened a couple of times with people - teens in school uniform for example. All of which made today's behaviour so extraordinary and disturbing. Dylan really had me thinking that we should avoid this man.
Luckily, he turned off onto a different path so we didn't have to walk past him. After that, we met dog walkers, mothers with toddlers and pushchairs, two guys gossiping on a bench - the normal sort of folk I'd expect to see - and Dylan didn't bat an eye at any of them. It was only the one man that he seemed to feel a need to protect me from.
A bizarrely disturbing experience,
Posted by maryom at 13:55 No comments: