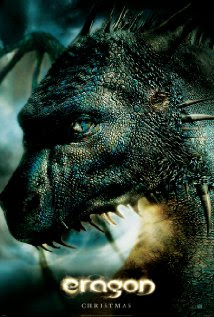 I love Sword and Sorcery films - and books for that matter - and could watch Red Sonia or Legend forever. I'd read Eragon a while ago and enjoyed it, but hadn't been able to persuade anyone to go and see the film with me, so last weekend I settled down to watch it on TV in the hope of a good evening's entertainment.

Unfortunately, it was neither good nor entertaining.

I think in attempting to condense a longish book into a shortish film, too much of the plot had been sacrificed and the viewer left with a formulaic farm-boy turned hero epic with a lot of Star Wars overtones - Eragon/Ed Speleer's at times looked very like Mark Hamil and an older British actor (Jeremy Irons) was on hand, of course, to help him with his new found powers.
Somehow, Saphira the dragon was not as I'd expected her to be. I don't really visualise people, or mythical creatures, when reading a book but this dragon looked more like a flying Loch Ness Monster than anything.
The 'bad guys' seemed rather dumbed down and reduced in terror and general creepiness - mere mindless thugs, rather like orcs but surprisingly armed with weapons that looked like the Klingon bat'leth.

Overall, with its simplified plot, I think it could have made an acceptable film for a younger audience if there hadn't been so much, quite graphic, violence. Definitely a hands down win for the book.
Posted by maryom at 23:30 No comments:

Having had to abandon our visit to Sotheby's Sculpture Exhibition a couple of weeks ago, due to a sudden downpouring of rain, we decided to re-visit this weekend.

Glad we went though as this lion, which we missed first visit, is my favourite of them all. 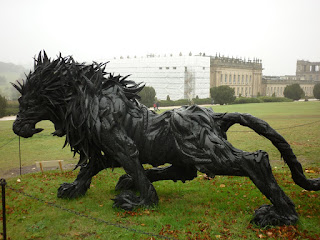 He's made, in part, of used tyres, which give him the punk hairstyle, and wrap round his legs like muscles. 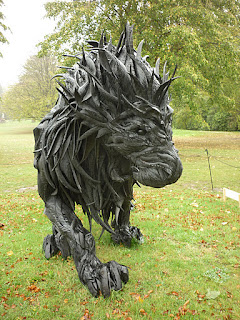