We all have too much clutter in our lives and homes, and I have to admit that, by nature, I'm a bit (lot) of a hoarder. I blame my parents for it - they were youngsters during WW2 and the austerity years that followed, and so saved everything - from old dresses to used batteries - with the idea that they might be useful for something one day.
So, always preparing myself for the zombie apocalypse, I do the same. 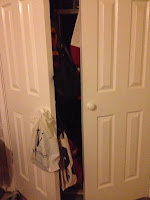 The result?
Wardrobe doors that won't close, boxes and baskets containing 'useful' things piled perilously high, a freezer full of allotment veggies ...  all of these made me include de-cluttering in my New Year resolutions. Unfortunately, for a long while putting it on a list was as far as I got but this past month or so I've been filled with an urge to spring-clean and throw things out. 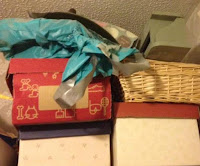 I started with clothes. I tend to hang on to things too long 'just in case'. They reach a certain level of shabbiness and I put them to one side for dirty jobs - gardening, decorating, helping dye  my daughters' hair - but rarely actually use them. Then of course, the next generation of clothes goes the same way - a small hole here, a stubborn stain there, but still fit for those messy days - and before I know it, drawers, shelves, wardrobes are full of clothes too tatty to be worn outside the house. So, time at last for a clear out - old t-shirts, ripped trousers, they all went into bags and off to the charity collection point, BUT I did find some useful coats and jackets that I'd completely forgotten!
Then shoes ... again it's amazing to discover how many scuffed and worn pairs I'd hung on to assuming I'd wear them someday, and perfectly good pairs lying ignored in scruffy boxes.


Tucked away in a cupboard I had masses of paper, card, snippets of wool and fancy threads, paint, pens, all sorts of things that just might be used in art or crafts. Most of it dates from when my youngest was at primary school, so at least ten years ago, and the pens and paints are dried out, the paper creased. I went through it all, still kept some bits that might be used for card-making, but most of it has gone. 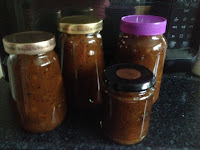 Lastly an odd sort of de-cluttering - garden produce, both fresh and frozen. It's the time of year when lots of allotment produce has to be picked before the frosts and winds of autumn ruin it. Squashes and pumpkins sit on the windowsills, onions are strung up in the garage, and boxes are filled with apples. It's nice to have so much home grown veg but before long you can't move for it, and the freezer lid rfuses to shut!
First I tackled a couple of butternut squashes that weren't going to keep - soup used up a small amount, chutney a lot more. Then apples, particularly windfalls, and those slightly damaged by bugs or wasps, went to make jam with some blackberries from the freezer, which helped start to clear that up a bit too. Tomatoes have been turned into passata, courgettes into bread and butter pickles. Fortunately neither chutney nor jam take up as much space as the raw ingredients. It's not made a massive amount of space but it's a start. I plan next to make more jam - apple and (frozen) raspberry - chutney with gooseberries from the freezer, and maybe flavoured vodka with (frozen) redcurrants. After all, I need to celebrate my de-cluttering success!

To be honest, it feels like merely the tip of an iceberg; that behind cupboard doors huge amounts of STUFF is waiting to escape. But at least I've made a start, and gained some space to shoe-horn NEW clothes into.
Posted by maryom at 16:46 4 comments:

Busy, busy, busy. Can I have a rest now, please?

It's been one of those non-stop, out-every-night weeks - and now I'm exhausted!
It started really last Sunday, getting up at six in the morning ready for Leicester marathon (fortunately, no one was expecting ME to run!)

Monday evening we were at a gig organised by my youngest daughter at JT Soar in Nottingham, with Meg Garner's personal, intimate poetry, a set from my daughter playing as Ayres, local guy George Gadd playing anything and everything except music from his new ep, and 'on-tour' artist Chloe Glover. I've seen Chloe before, back in June, singing her mix of  ballad-style songs and 'loud shouty stuff' (her words, not mine! ) and liked her music then but haven't really got round to checking it out properly. Seeing her again convinced me I should!


I might have got away with staying in on Tuesday, but I thought I should nip to to see my parents, nearly a thirty mile round trip, so it takes a chunk out of the evening leaving no time for lazing in front of the TV

Wednesday was another gig night, this time at The Speciality Coffee shop in Nottingham, to catch Dave Giles and Lewis Fieldhouse on tour with a special addition to Nottingham's bill of Ayres opening for them. It was an unusual location - a cafe - discovered by Dave on a previous trip to the city, and somewhere I must have walked past several times but never noticed. it was certainly lighter and airier than many gig venues - and had seats for all :)

On Thursday we were off out to Nottingham Playhouse to see Arthur Miller's classic All My Sons, about a family torn by the death of a son in WW2, and a cover-up at the family armaments factory.

By Friday I was hoping for a night off and a chance to sit and read my book, but I was made to go running. I'm sure it's good for me but it was dark and dismal and hard work. 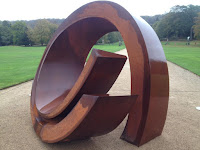 Weekend at last - that's supposed to be a time for rest, isn't it? Anyway ... the past couple of days we'd been checking the weather forecast regularly due to incoming storm 'Brian' and with rain expected anytime after Saturday lunchtime and then hanging around for most of the weekend, we decided to chance the morning drizzle and have a walk round Chatsworth gardens to catch the sculpture exhibition again. Of course, we managed to get wet, though not as much as on our previous trip, and we did see all the exhibits at last. I just wish we could have found a bright sunny day. 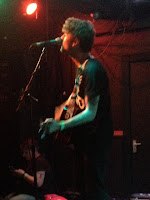 Then in the evening, guess what? we were off out to Nottingham again! Third gig of the week, third venue - The Maze, this time to see good friend Joe McCorriston and his mate Gaz Brookfield.

Despite my new-found, possibly short-lived enthusiasm for running, you're not going to find me trying to keep going for 26 miles, but my youngest daughter is made of stronger, more determined stuff, so, after completing a half marathon earlier this year, had signed up for Leicester Marathon last weekend.
Sunday morning we were up bright and early (six o'clock! argh!!) to see her head off, then to follow a bit later and catch her along the route. We expected problems getting 'inside' the roads that would be closed for runners, but as it turned out allowed FAR too much time for getting there. 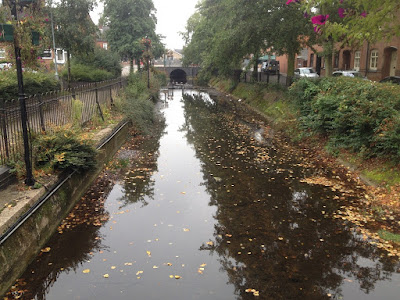 So we started the day with a walk round Syston, alongside Barkby Brook, 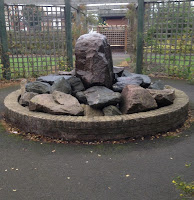 and through the park, followed by a quick Costa, before heading up to Queniborough to see our runner pass the 10 mile marker.


The marathon route then continued north away from Leicester before looping back past Syston. It was a little early for lunch but this seemed like the best gap time-wise to eat, so we headed back to the same Costa for a little 'something' before catching the runners at mile 18. 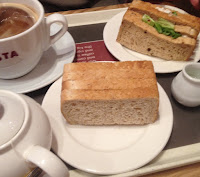 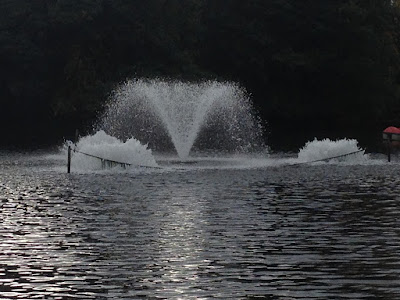 Then we had a bit of a dash to get to Abbey Park in Leicester for mile 24, not helped by taking a wrong turn! 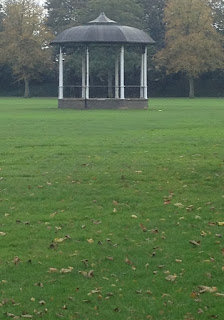 The sun had now come out, and we had more spare time than expected, so we had a pleasant stroll through the park with its lakes, flowerbeds, bandstand, beautiful autumnal trees, the river Soar running through it, and a pretty 'Chinese' garden, before meeting up with our runner again. 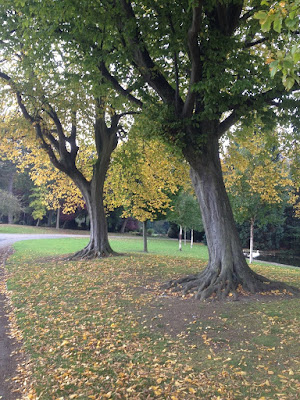 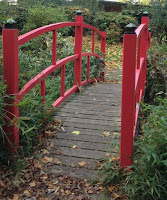 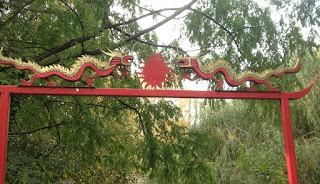 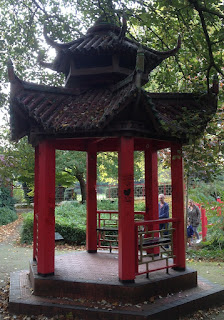 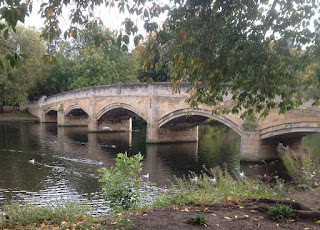 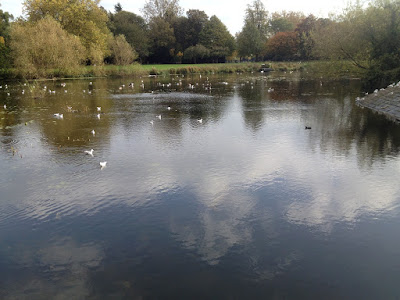 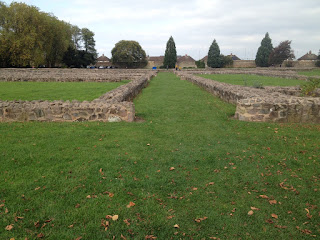 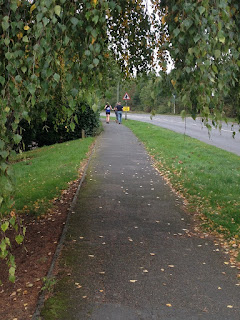 Oh you'd imagined there be more about the marathon itself?

Well, we saw a man running in a frilly ballet skirt, another dressed as a pirate complete with cutlass, and one running barefoot (ouch!), but the timings and such weren't of much interest to me.
Most importantly, my daughter finished, exhausted, and full of aches and pains, but happy to have managed it at her first attempt - and here she is running along, in the distance. 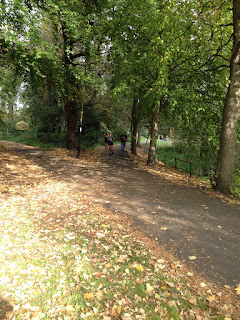 I think it's amazing how much she's achieved in the last year or so, to go from a non-runner to marathon-finisher, though I shan't be letting her persuade me to try.

She was raising money for the mental health charity Mind, and her Just Giving page is still open for a month or so

Running away from zombies

I've been talking for a while about taking more exercise and getting fitter, but, despite it being one of my New Year's Resolutions, I haven't really done anything about it in an organised manner. OK, for a while I regularly did 10-15 minutes of zumba in the evening, but then the days grew longer, the curtains didn't need shutting and I stopped, rather than have passers-by staring at me. Over summer there's always gardening to be done, and I think with my stay-cation outings I went out walking more than usual, so I think I'm at least maintaining my level of activity.

As middle, if not old, age creeps up on me, though, I'm not sure if this is enough. 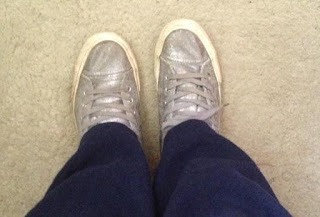 And, something you should always take into consideration, what about the zombie apocalypse?
Please don't say you've never thought about it!
Doing a Buzzfeed quiz I always know the best way to survive the sudden appearance of zombie hoards on the streets ... but always fall down on one important question - Can you run a mile? Oops! I can't even run 100 yards these days. The zombies would catch me every time.
So, with that in mind, I've taken up running.
I shan't be joining my husband and his mates at their running club (to be honest, I don't think they'd approve of my motivation, or indeed my running kit pictured above) but my youngest daughter is currently training for her first marathon, and when she came in from a short run last weekend I asked if she'd be happy to go out again with me.
So we did.
Incredibly slowly.
Not my decision I hasten to say - I'd have run as hard as possible for five yards then collapsed in a heap - but my daughter insists this is the way to do things and as she's gone from non-runner, to half-marathon (and hopefully marathon soon) finisher in little more than a year, I'm taking her advice.
I have three months before the end of the year, six before a milestone birthday, let's see if I can outrun those zombies by then!


And if you're interested, my daughter's running Leicester Marathon this Sunday, raising money for MIND  and you can find her Just Giving page here.
Posted by maryom at 21:09 8 comments: