Off to Curious Arts Festival again ...

This weekend everyone's been talking about Glastonbury festival, and I'm sure it was tremendous fun, but I'm looking forward to a smaller, more intimate festival - Curious Arts to be held at Pylewell Park in the New Forest on 21-23 July. 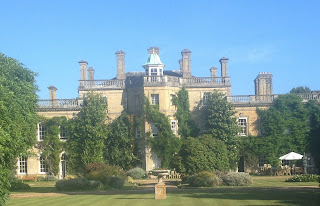 I was invited along last year as part of the Our Book Reviews team, and loved every minute. Its style is quirky and eclectic, less of a 'festival' in the Glastonbury sense, and more of a English country fete with a sophisticated twist of up-market food providers, and cocktails to refresh the weary instead of weak, sweet tea.
There were bookish events during the day, comedy shows in the evening, music acts at night, with something to entertain all ages happening all day long.


I blogged about the experience at the time, but as I started looking forward to this year's festival I wondered which impressions had stayed with me from last year ...
firstly, the friendly, family atmosphere - being a smallish event, by lunchtime on Saturday I was beginning to spot familiar faces as I wandered round;
the wide variety of things to do - I went to SO MANY book events in such a short time, while my daughter went to yoga and discussions of the day's political news;
the food (though don't try tagine in a burger bun!);
discovering that camping is actually quite fun;
and partying in the evening. 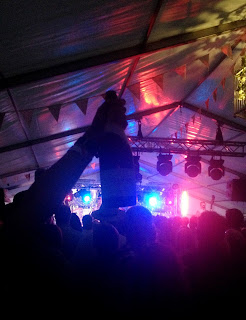 Then there were quieter moments - being woken at dawn by seagulls; heading to the bottom of the grounds in the early morning mist and catching a glimpse of the Isle of Wight ferry, seeming to glide by on land;

wandering back from the showers (yes, amazingly there were hot showers) late at night and star-gazing while music drifted over from the marquee; sneaking into the Skinny Lister sound check ... I could go on, probably for too long.

As the programme starts to fill up, I'm making my plans for this year. I'm asked along as a book blogger so obviously I'll start with the authors I'd like to see - novelists Rachel Joyce, Joanna Trollope, Matt Haig, and Eimear McBride, poet Lemn Sissay, and Isabel and Julian Bannerman, gardeners to HRH the Prince of Wales.

Later in the day there'll be music  - Tom Odell is headlining Saturday night, but I've been checking out some of the other acts, previously unknown to me, and I'm hoping to catch Iceland's Junius Meyvant, Aine Cahill, Jordan Mackampa and MarthaGunn.

In-between all that (there'll be time, won't there?), I hope to explore the "workshops and curiosities" section of the programme - from wine masterclasses to crazy golf, a late night bat walk and an emergency poet. I might give the snail racing a miss though. 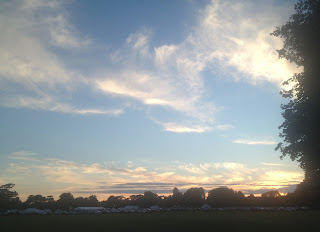 Meeting-up with on line friends (or setting a bad example)

One of the first things we make sure our children understand when they start using the web is DON'T arrange to meet up with folk you don't know in real life. But how many of us actually hold to that rule? I certainly don't set a good example, as I've been doing it for years now. 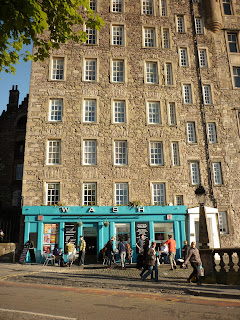 As a book blogger, I go along to literary events, and meet authors and their publicists - sometimes it's for a brief  'hello' at a book signing; sometimes a longer chat with an author who's become more of a virtual friend, and we'll discuss gardens, children, or pets; too often it's running into someone in a queue for the toilets!
Occasionally I've met people for coffee or pizza, and once,
when I'd mentioned on Facebook that we were holidaying in Edinburgh, I was invited along to Edinburgh Literary Salon above the Wash bar. My daughter, probably from scare stories she'd heard, was convinced I'd be found drunk and rolling in the gutter afterwards, but fortunately I survived without such drama! 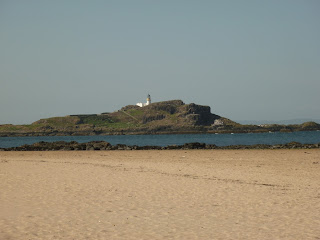 On Twitter, I'll talk to almost anyone, on FB, I've always been prepared to accept friend requests from anyone who moves in my sort of circles, and I've met up with people from both.

I've gone out for coffee/lunch, walked dogs by the sea, and once invited someone round for the evening while their kids were at a concert, rather than them have to spend the time sat in a burger bar.
Maybe it's more luck than judgement but none of them turned out to be axe-wielding weirdos.


My daughter went on to not only follow my (bad) example and meet up with folk she only knew on-line, but to invite them to stay! That proved to be so much fun that we've carried on offering a place for touring musicians to stay, mainly guys we know, occasionally total strangers, but it's always worked out well. 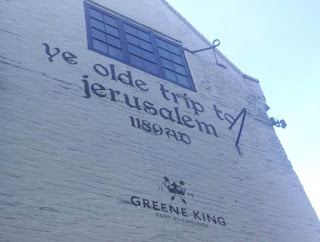 So when I happened to be chatting on Twitter to Amanda Riley, an American musician who was going to be spending a day alone in Nottingham, and she suggested meeting up, I thought to myself  Why not?
We spent the afternoon checking out Nottingham's (if not England's) oldest inn, chatting about mutual acquaintances and her future plans, and in the evening I went along to hear her play at the Hop Merchant.
Hopefully she'll be back in the not distant future, and maybe to stay with us. 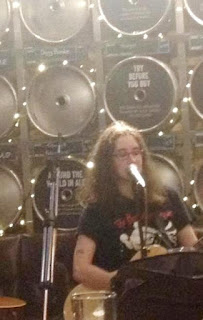 Would I encourage a youngster to do any of this?
No! I'd always say safe is better than sorry.
But just maybe as adults we're a little too cautious or paranoid? Sometimes it's a good idea to step out of your safety zone and see what interesting people you can meet.

The weirdest not-quite-meeting of all remains the time I was walking in a country park and thought I recognised the person (and dog) walking towards me. I didn't say anything then - after all to have been wrong would have looked foolish - but I checked later online; I did know them and I wished I'd say Hi!
Posted by maryom at 22:30 12 comments:

Out and about again

At last, after being house-bound for ages with a horrible summer bug, (or at least feeling that way) I've managed to get out for an evening - and a lovely one it was too.

Tealights on the tables gave an intimate, cosy feel to the venue, and there was great music from Chloe Glover and Joe McCorriston (currently on tour and just stopping off in Nottingham for the night), and local singer/songwriter George Gadd.

I'd been feeling rather smug as I'd got through winter with barely a sniffle but now I've been laid low by a summer bug, and a leg injury so I've spent the past two weeks more or less confined to the house -  and it's really beginning to annoy me!
The leg injury came first - I fell over a small fence, and scraped a fist-sized chunk of skin off my shin. Ouch! Although this is healing, it's such a large area of skin that it's taking ages. Walking any distance aggravates it, sitting still too long makes it ache. Meanwhile I hardly dare venture down the garden path for fear of walking into a plant stem, or open a cupboard in case something falls out.
Then a few days later I came down with a wheezing cough. For a while it was amusing - I was making all sorts of weird noises, from a cat-like purr to Darth Vader groans, squeaky trumpet to full blown brass band; my daughter mistook me for a ringing phone, and even managed a two tone ambulance siren noise! But the days went on and instead of going away, it morphed into a cold, then back to a wheezy chest ...and it's stopped being funny.

The two together have left me tired, aching, and out of breath, but what's really frustrating me is the length of time it's taking to get fit and well again. I've had to cancel all sorts of plans -from my monthly book club to a music gig, and even daily tasks like housework and gardening have been reduced to a minimum - and I'm not amused.
I suppose taking longer to recover is something that happens as you get older, but I'm not ready to give up yet! I've talked about it before but this time I think I actually need to make some progress on those diet and fitness plans, so that next time I'm in better shape before the bugs hit, and hopefully will bounce back quicker.