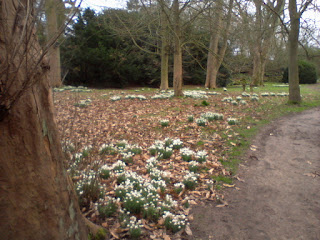 Glorious sunshine this week has seen me out and about enjoying snowdrop displays. 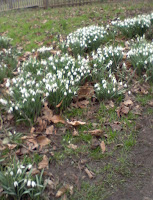 First we visited the gardens of Calke Abbey, owned by the National Trust 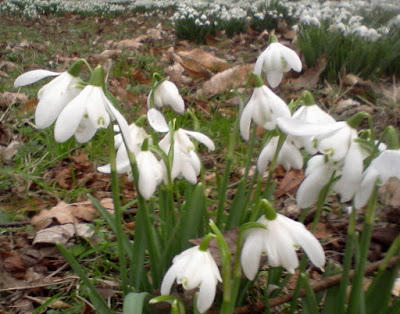 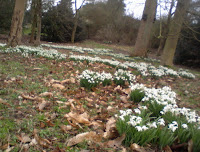 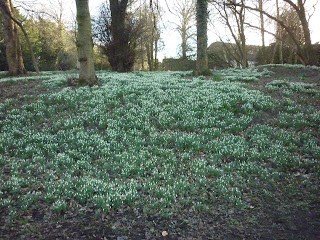 Then Shipley Country Park where snowdrops line the old drive to the now-demolished house. 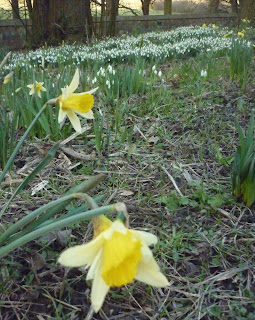 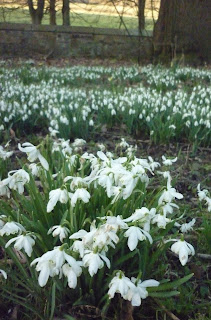 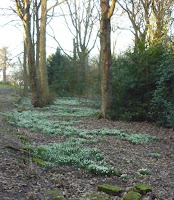 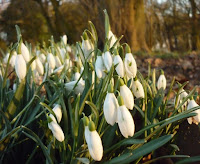 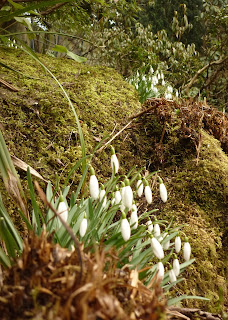 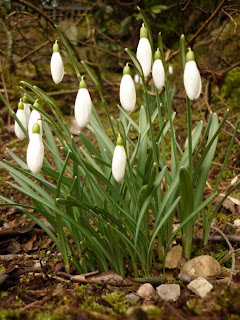 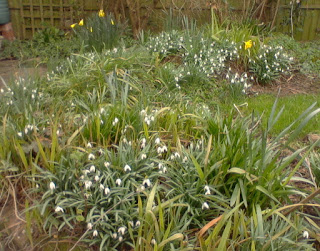 and for the days I didn't go out, there were always the snowdrops at home.. 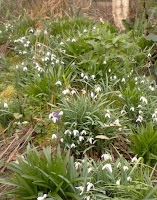 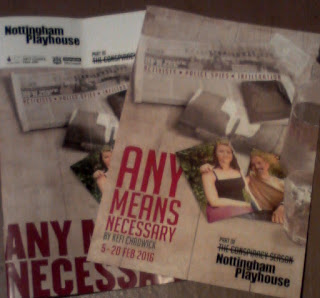 After a break for panto over the Christmas period, Nottingham Playhouse is continuing its "Conspiracy Season" with Any Means Necessary - a tale of state-sponsored betrayal which takes as its starting point the real life case of an undercover policeman who worked his way into the life and affections of a committed activist. Playwright Kefi Chadwick has built a dramatic, compelling story around these totally underhand tactics.
Mel meets Dave at a protest, they're attracted, he convinces her that although he's newly into activism he's as committed as she is. Their tastes in music and hobbies seem to mesh perfectly and before long they move in together - but while for her this is a real relationship based on shared love and respect, for him this is just part of his day's work, trying to work his way into the heart of the protest movement. It seems like the stuff of spy novels, but it's based firmly on fact.
I expected to be angered - and I was. I didn't expect to find it funny, which it occasionally is, and I didn't expect to find any sympathy for undercover cop Dave, but I did. It's easy to feel sympathetic towards the women who were exploited but for me one of the strong points about Chadwick's story was showing both sides of the argument; how by going undercover Dave put his 'real' life on hold and risked losing his wife and family, found himself torn between the two halves of is life, but whenever he had doubts about continuing his assignment was manipulated by his boss with false praise about the national importance of his work.


Don't be put off Any Means Necessary thinking it's dull, dry politics. As a play exploring just what lengths under-cover police work might go to, it's bound to be political and thought-provoking, but it's above all a good story, well told, occasionally funny, and excellently performed.


Previously in the Conspiracy Season - The Rubenstein Kiss
Posted by maryom at 09:59 No comments:

Keeping up my resolutions - new music; Thom Worth and Tim OT - The Leap Year Tour 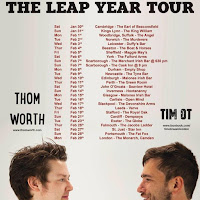 If you saw my post about New Year's resolutions, you might remember that under the banner of 'getting a life' I was going to go out more to music gigs and such. Well, 'more' isn't that difficult as, beyond the four organised by my teen last year, I haven't really been to any! Somehow they were never part of my teenage  'scene' and as an adult I've either not had the cash or the inclination, BUT my teen has changed all that. Although I don't want to slavishly follow her, I share a lot of my teen's musical tastes and really enjoyed the gigs she put on in Autumn, so since then I've been following those musicians on Twitter, Facebook, Band camp etc and also checking out others that they recommend. So when first one on Twitter, then another on Facebook, shared a link to this Leap Year Tour by Thom Worth and Tim OT, I clicked on the links, listened to their songs on Bandcamp and decided to risk it. To make this more of a 'worthy' evening out, these two guys are bringing their mix of folk/pop/punk to the length and breadth of the country this month and raising money for the charity Overcoming MS as they do.

Further checking on the web informed me that their nearest performance would be at an open mic session in a pub. Now I haven't been to one of these before, but assumed it would be held in a separate room away from the general bar area - so I was surprised to find that night's musicians would be expected to play in a corner of the main room, in front of the dartboard (fortunately, no one wanted a game!)

It took a while for the evening to get started (note to self; don't bother turning up on time in future), and when it did four local acts were on first, so when Thom Worth took to the floor it was getting on for 11, and about midnight by the time Tim OT finished his act!

I was glad we stuck it out though. Both guys were great, louder and more self-assured that the locals, and at last the noise from the bar was drowned by music! Afterwards, we went along and said hi to them, bought cds, and probably would have chatted for hours if it hadn't been so late (I know, not if you're young and used to clubs open till 3 in the morning, but I'm not!)
Would I go to see them again? Yes, definitely; I hope they'll be back to Nottingham soon. Their sound, though not the same, is not a million miles from the Frank Turner/Will Varley/maybe even Mumfords sort of folk/rock music. If you're fan of any of them go give Thom and Tim a listen - they're heading north now, so especially if you're anywhere near John O'Groats keep an eye out for them.

I also snapped a pic of the poster of upcoming events at the same venue - some of the artists I've heard of, some are definitely new, but I'll aim to go back and hear them; meanwhile I'll be keeping track of recommendations through Twitter and see who else I'll 'discover'.

The first few weeks of New Year's resolutions are always the most enthusiastic, and, as I didn't make mine till mid-way through January, I'm still in that 'zone'. 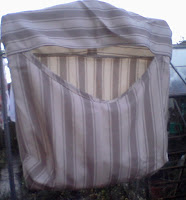 I've mainly been working on the de-cluttering - sorting out old clothes that could go to a charity shop (though I haven't actually taken them yet), mending a pair of trousers that had waited for at least a month, and finding material out of the stash to make a peg bag with. 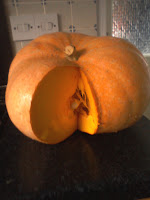 And, in a slightly different sort of clearing out, I decided it was time to attack the largest of our home-grown pumpkins. It's been sitting around, cluttering up the back 'porch' since autumn, mainly because it's so big; it will never get eaten quickly enough in lunches and dinners so I'll have to make chutney or preserve with the leftovers. It's about 10 inches across and the small slice taken out at this point was enough for lunchtime soup. For now it's in the fridge, occasionally having another slice chopped off for chilli or goulash, but it won't keep there for ever and soon I'll have to decide how to use the remainder up.

As for my other resolutions, well, they've met with a varied amount of success - I have spent less time on social media, and as a result not been tempted to enter so many competitions (so no more unwanted prizes); I'm taking my time over reading - two review books per week instead of four - and enjoying it more; I've taken to setting my alarm clock, but mainly managed to sleep through it. 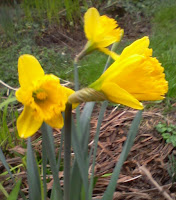 I've definitely been getting outside more - walking up to the library and spending time pottering about in the garden, pulling a few weeds, setting sweet-peas and taking time out to check on the daffodils burst into very early flower, 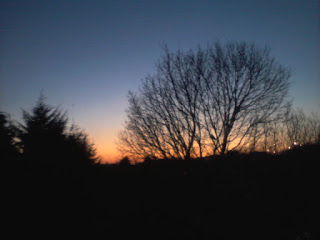 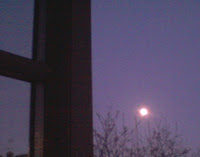 and the moon rise.


The 'resolution' I've worked on least has to be 'get a life', although I do have plans for February....
Really though I'm not looking for quick fixes or a complete change of life-style occurring in one week but a more long-term change of habits, so I feel I've at least made a reasonable start.
Posted by maryom at 01:20 No comments: