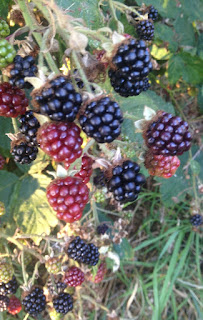 It's blackberry season again, and it seems to come around earlier each year.

I'm sure, way back long ago when I was small, blackberries ripened in September, maybe even as late as October. Certainly, in my memory, the long walks taken to pick hedgerow blackberries took place in Autumn, on a sunny Sunday afternoon sometime after the 'return the school'.

Nowadays, I don't have to go on a country ramble - I pick large cultivated blackberries that grow on the edges of our allotment -  and I don't have to wait till Autumn - the first fruits start ripening in early August, and by now I'm picking a bowlful every couple of days,possibly more if the fruit is at the right height for me to reach. 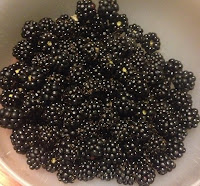 To be honest, though, I miss the whole feel of an 'occasion' that blackberrying used to have. Either my mum or grandma would head up a proper expedition, equipped with bags and bowls for our pickings, and hooked walking sticks to pull down the highest brambles. Hours later we'd return home laden down with pounds and pounds of fruit, and almost the same number of scratches from the vicious thorns.


There were nearer places where a handful or so of fruit could be picked to add to an apple pie, but the longer foraging trip was to a place where we hoped to find enough blackberries for jam. As an event, it fitted into the calendar between the beginning of the Autumn term and Bonfire Night, round about Nottingham's Goose Fair which starts the first Thursday in October;a time when afternoons might be sunny and warm, but mornings are beginning to feel cold, and spiders weave enormous webs across the footpaths on the way to school.

Picking blackberries down at the allotment isn't quite the same. 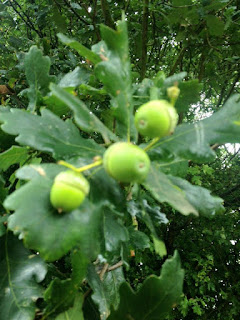 After a stiflingly hot day yesterday, today has taken a stride towards Autumn. 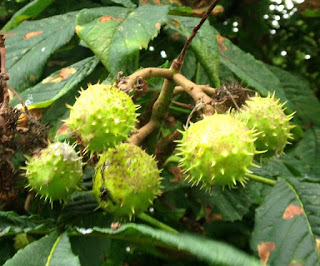 This morning's dog-walk was damp and misty, and the acorns and conkers seem to have had a growth spurt overnight! 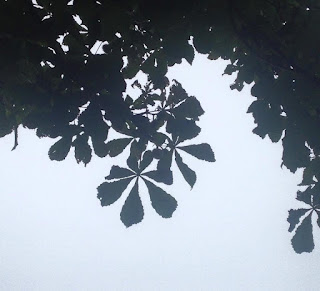 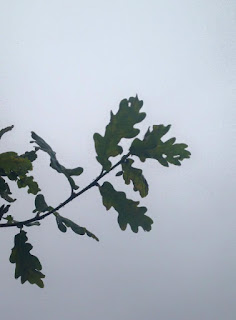 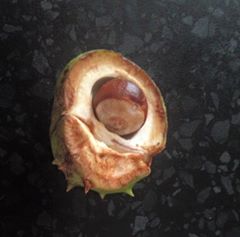 I started out the day with a simple plan - to dig a hole and plant this verbena which I rescued from the allotment yesterday; there they grow like weeds, in the garden they only survive a year or so. 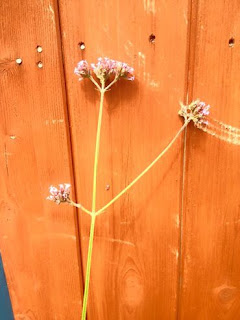 I picked a spot - a different area to where the other verbena is struggling to grow through montbretia and michaelmas daisies - but quite near to a lilac bush which is about twenty feet tall and needs pruning ... so I thought I'd do that first ...

A couple of hours later, and the pruning wasn't complete but I did have a huge pile of branches blocking the patio, plus insect bites on my arms and a lump on my nose from hitting myself with the tree-loppers. 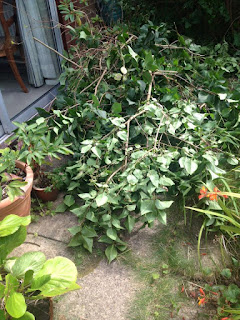 My quick and simple task was turning into a mammoth one, and it was lunch time (and a late one, too!) I decided at this point to leave any more tree-chopping for another day, and instead concentrate on getting the pruned wood into a combination of dustbin, compost heap and bags to transport it to the allotment.
Another couple of hours passed ...
It's quicker, and definitely more fun, chopping lanky branches from the tree,than it is getting them tidied up. Eventually though by late afternoon, the patio was clear, and, guess what?
I dug a hole, and planted that verbena.
All day for one little plant.

A novel on my phone; is it really possible? 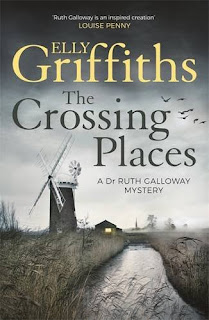 Anyone who knows me will agree that I'm not one to bother with keeping anywhere near the front edge of technology. I've never owned a brand new phone - just my children's cast-offs. Similarly, I'd probably never have bothered with a Kindle if we hadn't been bought one for Christmas a few years ago, but I soon came to love it. It's more convenient to carry around, on holiday or just on dull car journeys, and about a third of the books I review are read on it, plus all those 'free download' offers that are hard to resist.
I couldn't imagine I'd make the swap to reading on my phone though.
Then, a month or so ago, I spotted a free i-book promotion for The Crossing Places by Elly Griffiths - I couldn't download it to the Kindle but would I be able to read it on the small screen of an i-phone 4? As it was a book I really wanted to read, I decided to give it a go. After all, it was free!
It's the first of the Ruth Galloway series, published back in 2009, and a book I've intended reading for quite a while - in fact since I first heard Elly Griffiths talking about the series at a book event three years ago. But intending to do something and actually getting round to it are two different things and with so many other books demanding to be read I continued to put off ordering it from the library - and meanwhile the series grew, and is now up to Book 8, The Woman in Blue, with a ninth on the way. Anyway, I downloaded it quickly before I started having doubts about the possibility of reading anything longer than a text on a small, about 5 cm, phone screen. That might have been the end of the experiment with it sitting there for months, probably until I'd forgotten it was waiting (for this is a problem with e-books of whatever kind; there's no physical book pile as a reminder). Then one night I ended up sitting waiting for someone, with no book or wi-fi to amuse me, but at least I had my phone - and The Crossing Places downloaded and waiting to be read.


It wasn't easy at first.

The text size needed to be tweaked to get as much as possible on one screen while keeping the font large enough to read, and sometimes I seemed to be turning 'pages' every few seconds. But once that was sorted, it worked surprisingly well, helped no doubt by this being a story that swiftly had me hooked.


In a way, I'm surprised how much I liked this. I sort of thought this was just another gimmick to have on a phone rather than something of any practical use, and certainly never thought I'd say 'It's not a bad idea'. It's not perfect - those short pages in particular - but it's so easy to carry round! I'm not exactly hooked but it's certainly a method I'll consider in future.


This isn't intended to be a book review, but you can read that here if you're interested. 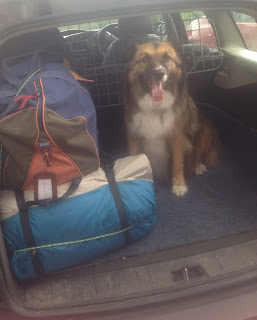 You might remember that a fortnight or so ago I was wondering about the sense of deciding to go camping, after all I'm at the sort of age when folk normally start taking things easy. I'm not going to sit and let old age creep up on me though, so, after a certain bit of dithering, I thought we should take the plunge.
We bought a tent, practised putting it up (and taking it down, which is harder!), eventually got it back in the bag and loaded the car. Dylan the dog didn't seem to mind sharing 'his' space with the luggage; in fact he looked quite eager to be off! 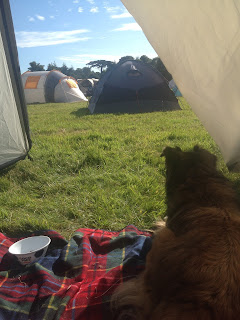 Our destination was A Curious Arts Festival in the New Forest and the journey took a lot longer than predicted by Google maps. Still, the weather was good, and, although things didn't go quite as easily as on the trial run, the tent was soon up and Dylan could relax. We'd bought a 'goat stake' to fasten his lead to, in case he looked like wandering off, but when we were both sitting in the tent he was fine just lazing around. Another thing we decided to not use was the groundsheet for the outer section. It was so noisy when walked on, that, as the weather was hot and dry, we managed with just a picnic rug.

So far, so good, but how about all the expected problems with toilet queues and dodgy showers?
Thankfully, the problems I'd expected didn't really arise. The toilets were the typical festival non-flushing variety, and a bit iffy in the mornings before a truck came round to empty them, but the showers were hot, and, though not luxurious, certainly adequate. Maybe I was just lucky but I never had to queue for either. 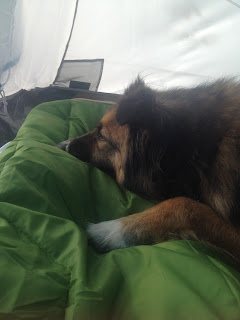 I'd also been worried about how comfortable the inflatable bed would be. My visitors have always said it was fine, but then maybe they would out of politeness. Well, to be honest, Friday was a tiring travelling day followed by music late into the evening, and Saturday started early with seagulls waking us, then of course there were things happening all day, ending with music again at night, so by the time we were thinking of sleeping, almost anything would have seemed comfortable. 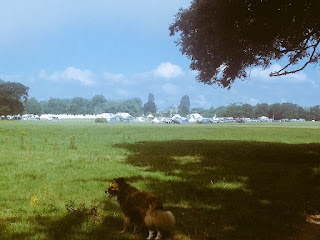 We were probably fortunate to have chosen a quiet,well-mannered festival for our first trip - there were no drunks stumbling over guy-ropes or singing in the middle of the night, no children playing football at first light. I'm not sure we'll always be so lucky.

The idea of having somewhere to retreat to during the day, particularly with Dylan, worked well - though I wish we'd had chairs to sit on rather than just slump on the bed. Something I'll put on a shopping list before the next trip - because I think there will be more camping expeditions, even if only to festivals such as this.


For more on the festival events see here