As I shall be very old this year, I've decided not to mourn the passing of time but turn the whole year into a celebration, by attempting to experience sixty (yes, that's how old I'll be) new things.

And I'll add my adventures below as the year progresses

January
1) Making spaghetti carbonara - easier than I expected, and looks like becoming a firm favourite.Why didn't I try to cook it sooner?? 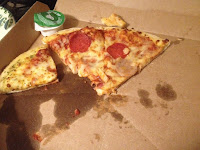 6) Dominos Pizza - It's hard to believe it but I've never had home delivery pizza before! We had cookies as well :)


7) Tapas including the promised (threatened?) squid - love the tapas concept, didn't like the squid (though it was beautifully presented)! 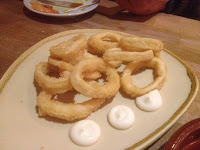 8) Rescue Rooms acoustic session, watching Joe McCorriston - ok, I've been in the Rescue Rooms bar before but only after gigs in the other room, never on the acoustic Monday evenings to listen to music.

February
9) Chicken in Plum Sauce - I normally stick to tried and trusted (and very delicious) Szechuan chicken when ordering Chinese takeaway, so here I am stepping outside my comfort zone

10) lunch at a Harvester - again, I've led a sheltered life, and never encountered their HUGE sundaes before

March
12) with the disruption caused by snow and my parents' health problems March didn't really happen, but I did get my first Mother's Day card from my grandson

April
13) Going to gigs without a daughter-shaped safety net. A surprise as I didn't expect to be so taken aback going to a gig without her along

15) Brinsley Headstocks Country Park - Going back to a place I knew well in childhood but which has been transformed from a derelict colliery site to pleasant country park since I last visited possibly 40 years ago(!)

May
16) Lodge Hill Bluebells, Yoxall - the name says it all; a new fantastic spot for bluebells

19) AirBnB - a real stay-in-someone-else's house style AirBnB (not a private flat as booked by my daughter in Edinburgh last autumn). Also this was picked and booked by me without any outside help!

22) Visiting Manchester - actually seeing some of the city

23, 24) Eating out at The Wharf, Manchester - new place (found accidentally by me when playing with Google maps!), new food (smoked trout with salade nicoise)

25) Urban exploring in Nottingham -  tunnels and the Arboretum 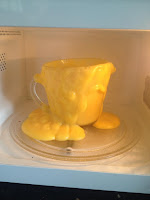 27) Swan Lake nature reserve, evening walk - another of those 'on my doorstep but never visited' places


28) Making custard in the microwave - not a success! 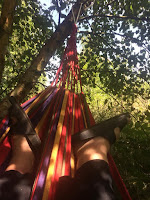 37) A Superhero day  at Wayne Manor aka Wollaton Hall 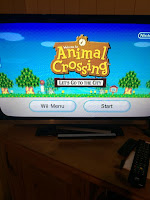 39) Animal Crossing - yes I know it's supposed to be a kiddies' game but I bought a second-hand Wii (to replace the old one that daughter wants in her flat), and it came with free games, so why not try it?

41) Lyme Park - a convenient sort of stopping off point between Derby and Manchester. Having tried to stop a couple of times we need to head off earlier in the morning!

44) Spotted Bonnie Prince Charlie in Derby! It's a re-enactment event that takes place every year, but I've never caught it before. Missed the planned skirmish by the cathedral so maybe that's something for next year

45) Lunch at a new place - the pub next to my parents' house. Despite growing up next door, I'd never been in for more than returning 'empties' to earn some pocket money till we held the reception after mum's funeral there. It looked like a nice place so we though it an easy option to take my dad out for lunch. He wasn't impressed but I thought it was fine - lunch portions weren't too huge, and we could probably have all eaten dessert if Dad hadn't been in a hurry to leave.

46) A trip on one of Nottingham's trams. A lot quicker and easier then using the car, but the acceleration takes some getting used to when you're standing! 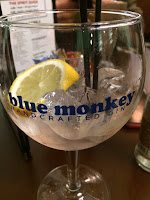 47, 48) Dinner out at Annie's Burger Shack - new place. I've heard a lot about the great burgers at the original Annie's in Nottingham but now we have one in Derby. Great food, excellent drinks (no 42 - Blue Monkey rhubarb and custard gin), quirky building. 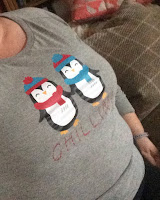 49) Got a Christmas t-shirt at last. Well, technically it's a pyjama top (a present from my older daughter) but I wore it as a t-shirt on Boxing Day 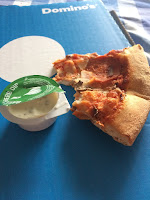 50) Cold pizza. Seriously, I've never eaten morning-after pizza before! It's a lot nicer than I expected (actually I might order extra in future just to have left-overs)

So, I haven't made it to 60 new things but it hasn't been an easy year, and I'm surprised how many things I've tried for the first time. I think it's something I might keep up for another year. Who knows what I'll do?