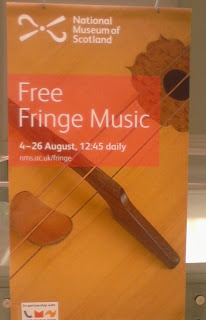 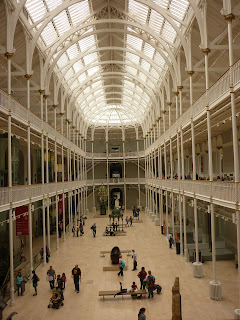 One of the wonderful things about Edinburgh Fringe Festival is the vast number of free events taking place in bars, clubs, empty shops, galleries and even museums.

Throughout the Festival the National Museum of Scotland played host to a wide range of music - from traditional Scottish fiddles and harps to Latin American and West African music.
So one lunchtime I dropped in to listen to Jennifer Port, singer and clarsach player. For anyone who doesn't know, the clarsach is a Scottish harp, smaller than the Welsh version and more portable and the museum has a couple of examples dating back to, I think, the fifteenth century.
The music was wide ranging in date and style from traditional ballads to Sting's Fields of Gold, even some for the audience to join in with.
A pleasant way to pass a lunchtime and become acquainted with music that's a little out of the ordinary. 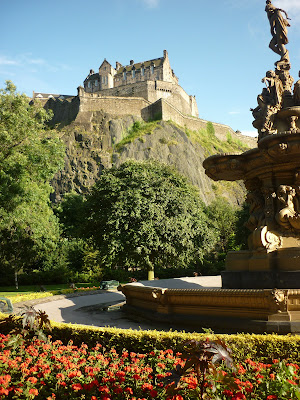 Edinburgh has to be my favourite city - in fact probably the only one I'd think of visiting for a holiday.

It has parks in the centre to sit in and soak up the sun - and yes, apart from a heavy 10 minute downpour one afternoon, the sun did shine.

It has fascinating alleys and secret wynds to discover just off the main Royal Mile which leads from the old castle on top of its rock to the 'newer' palace of Holyrood. 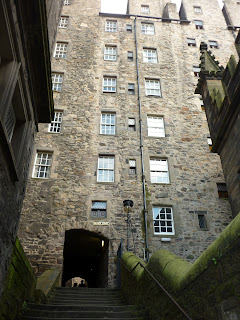 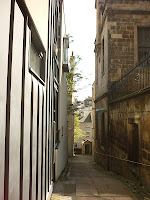 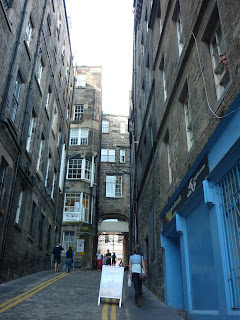 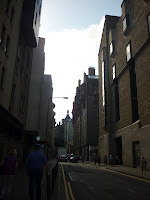 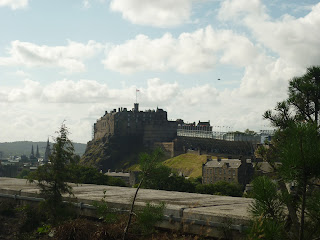 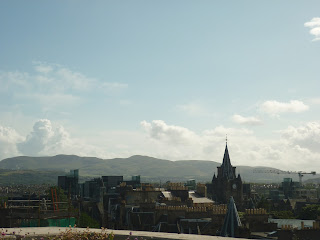 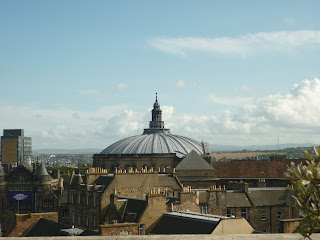 There's even a beach! What more could one want? 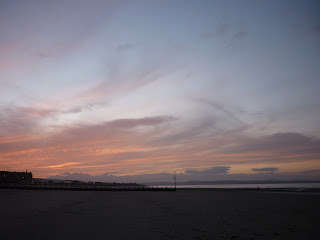 Once Upon A Time (In Space) - Edinburgh fringe

"Fairy Tales! Musical Cabaret! Steampunk Space Pirates!" - with a spiel like that on their flyer how could I resist going to see The Mechanisms and Once Upon A Time (In Space)?

The evil Old King Cole has abducted his finest soldier Rose Red with the intent of cloning a race of super-warriors. Her sister Snow White and seven companions escape to lead the rebellion and Cinders searches through space for her lost love.....

This was one of the many free Fringe events taking place throughout Edinburgh - in this case, down a dark alleyway and a flight of stairs taking us into an underground club.

Our party of 3 was divided, to say the least, in appreciation. I loved it, one didn't, one thought it was ok - so a fair cross section of opinion. The story was told mainly through song with some short sections of dialogue. A bizarre mix of folk and sea shanty style music, outrageous costumes and sci-fi reworkings of fairy tales - all culminating in a rousing version of What Shall We Do With A Drunk Space-Pilot (you can probably guess the tune). Great fun! 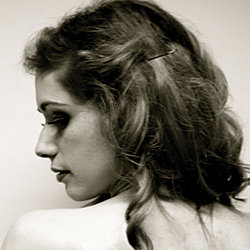 Closer by Patrick Marber is a story of relationships, deceit and betrayal. Four people - a wannabe writer, a stripper, a photographer and a doctor - meet, fall into two couples, break up, re-form, break up again.

Originally a stage play, it was filmed in 2004 by Mike Nichols and starring Jude Law, Clive Owen, Julia Roberts and Natalie Portman - so I must admit that when I was stopped on the Royal Mile by a young man handing out flyers for Rush Theatre Company's production of Closer I was a little doubtful about seeing it. After all I've watched the film version several times and although that isn't quite true to the original Patrick Marber script, it has stuck in my mind. I didn't want to go along to a performance that I felt almost certain would disappoint me.
Fortunately a half-price offer on the last day of our stay in Edinburgh tempted us to go - and I'm so glad I did.
I had expected a carbon copy of the film but was delighted to find nothing of the sort. It must be difficult to take on something and make it your own when a lot of the audience probably come along with pre-conceived ideas but Rush Theatre Co managed to pull it off. They brought out a lot more humour from the script - a different emphasis, an accompanying gesture is all it takes. The chat room scene in particular was brilliant! All the characters came across as significantly different to their screen counterparts - which altered the dynamics of the group. I found I had a lot more sympathy for 'Larry' in this version. He seemed more manipulated by the others and less devious himself. I don't want to single out just one person for praise though - all four actors were excellent.

All in all a brilliant end to our week in Edinburgh - and one that I so nearly missed.

Other Edinburgh Fringe 2012 reviews;
Porphyria by New Theatre Company
Once Upon A Time (In Space) by The Mechanisms
Free Fringe Music
Three Men In A Boat by Fat-Headed Chunks
Posted by maryom at 10:56 2 comments: 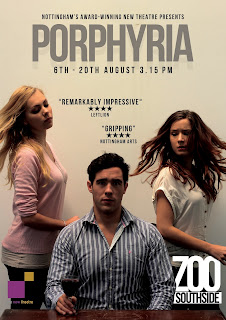 Reg and his wife are busy career people, merely passing each other on their way to and from work, barely holding a conversation.
At night though, while his wife sleeps, Reg dreams of his perfect woman - one with time for dancing and romance. Imagine his surprise when the new au pair arrives and is just like her! Reg soon finds himself captivated by her and his life is turned upside down.


How do you pick out a play to see from the hundreds on offer during Edinburgh Festival time? Well, in this case I was 'sold' it by the actress playing Reg's wife while I waited in the queue at the half-price ticket office, hoping another play was on offer. What precisely caught my attention I'm not sure - maybe the fact of it being a 'proper' drama, not stand-up comedy or cabaret or one of the many strange permutations that can be found at Edinburgh Fringe. Porphyria is a short - 60 minutes or thereabouts - excellent piece written and performed by The New Theatre, a student run company from Nottingham University (and, yes, it is slightly odd that I travelled all the way to Edinburgh to see someone from 'down the road').
It was enjoyable, often funny, sometimes moving. The actors worked well together creating a believable three-way changing relationship. There are a lot of restrictions on time and space with Fringe productions and I particularly liked the synchronised choreographed way of moving props - making it part of the play rather than an intrusion.
The venue, Zoo Southside, was so intimate that it felt almost possible to reach out and touch the actors. There was no raised stage to separate actors from audience which surrounded them on three sides. Quite how the cast managed to ignore us and perform so well I don't know.
Well worth catching - and I'll look out for New Theatre again more locally. 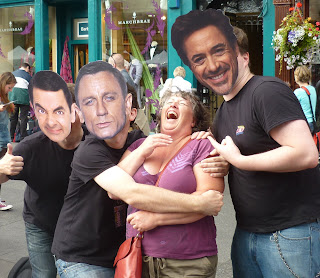 Just back from a fortnight in Scotland, spending the first week touring and the second in and around Edinburgh at the Book Fest and Fringe. Lots of follow up posts to come - meanwhile, a photo of me with new best friends Rowan Atkinson, Daniel Craig and Robert Downey Jr
Posted by maryom at 01:25 No comments: