Over the weekend, someone ( a publisher, I think) shared a link to Alison Flood's article in the Guardian about the recreation of David Balfour's heroic trek across Scotland in RL Stevenson's Kidnapped; "Readers, go wild! Which literary adventure would you choose in real life?"  by Alison Flood, and the final thoughts about following your own literary adventure had me thinking ... I wouldn't mind trying that, though to be honest I'd probably barely make it a half a dozen miles. So pretending I have limitless energy, no worries about time, expense, or possible danger, which ones would I follow ... 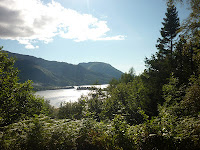 1 Kidnapped - Robert Louis Stevenson. Let's start with David Balfour's journey across Scotland from Mull to Queensferry, I've frequently spent holidays in Scotland - in places along this route - so I'd love to do this, though I suspect the wilder walking at the beginning of the journey would be the more interesting. I'd have to make sure I didn't get sidetracked by beaches and paddling though - Scotland's clear seas and empty beaches have proved too tempting before now when on holiday.


2 Cold Mountain by Charles Frazier. This novel always makes its way into my Top Ten lists - romance, war, whatever - so it's only fitting that it should be here. Inman's is another mammoth cross-country trek, this time through the southern US states from the battlefields of the American Civil War back to Cold Mountain, in North Carolina. On his way, a bit like Ulysses, he meets people who help him, people who hinder him, and some who just want  him dead! Inman is trying his best to avoid people and towns, so his journey is through uninhabited mountainous country. Sadly I suspect today most of it might be alongside a multi-lane highway rather than following little used mountain tracks - maybe I'd need to add in some time travel...

3 The English Patient by Michael Ondaatje. Two - or more- journeys in one book - across the North African desert, and up the 'leg' of Italy in another of my favourite books. Another war-time story, this time WW2, and again the journeys in the book are filled with danger, both man-made and natural.

4 Archipelago by Monique Roffey.  No hard foot-slogging required this time, just a better set of sea-legs than I've got. Again, it's 'leave out all the danger (and the sad part with the dog)" but give me a nice calm sea, someone to crew the boat, and the thought of following Gavin's voyage through the Caribbean islands really appeals to me.


5 The Unlikely Pilgrimage of Harold Fry by Rachel Joyce. To be honest, I didn't take much to Harold himself  - I've spent too many years telling children that you don't wander off without telling someone where you're going! - but even so, there's something compelling about his journey from Devon to Berwick-upon-Tweed, almost from one end of England to the other, sleeping in barns, sheds or rough as necessary. Just give me a more sensible pair of shoes, and maybe better lodgings ...

6 Lord of the Rings/the Hobbit by JRR Tolkein - ok neither are journeys you could really make (which is why I've put them together as one choice) but fantasy novels often have the best quest-style journeys in them, and wouldn't you just love to be able to follow Bilbo's and Frodo's footsteps?


7 The Riddle of the Sands by Erskine Childers - an adventure set just before the First World War among the islands the narrow sea passages of North Germany. There are spies aplenty in the original but miss them out and it could be a pleasant summer-time cruise. Coincidentally, it's another literary adventure that's being re-created - see The Riddle of the Sands Adventure Club

8  Murder on the Orient Express by Agatha Christie - without the murder! A fabulous way to see Europe, from the comfort of a deluxe train - no tiring walking, no worrying about being sea-sick, just sit back and let the train carry you along.

9 Three Men in a Boat by Jerome K Jerome - grab a couple of friends, and a dog, and head off on a gentle trip up the Thames, probably the most fun of these literary adventures

10  Smokeheads by Doug Johnstone - another Scottish adventure to end with. Four thirty-somethings set out on a trip to Islay, intent on sampling the island's biggest export - whisky. With vengeful policemen, psychopaths and a great amount of whisky, it's not quite David Balfour-style adventuring among the Scottish islands, but this is one adventure that I've actually been on! The locals were all friendly, the scariest thing a pony-trek, and I seem to remember the sun shining all week - remarkable for West Coast Scotland!