Music and Cake at The Maypole - my new favourite venue 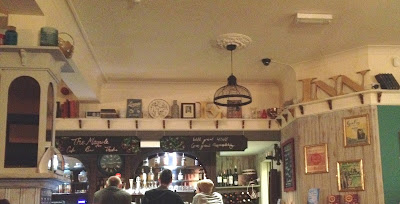 This is my new favourite place to go out for the evening - The Maypole Inn in Derby. It's cute and quirky, decorated with old photos and bric-a-brac, and a cross somewhere between a country pub and a tearoom.

So, with that in mind, it's probably fitting that the first event I went to, last week, was an Acousticake evening. There was live music from three local artists (including my teen) and there was free cake; hence acousti-cake.
How civilised is that? 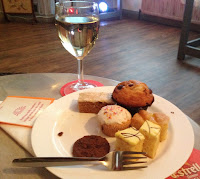 There'll be more of these evenings - and I'll be back!

Then, this Thursday evening we were back to see Tim OT and Patrick Craig reaching the end of a short tour they've been on before the launch of Patrick's debut album.

If you're a regular reader of this blog (are there even such people?), you'll know I've seen both of them before but on the bill with other artists. Together they work even better. Their sounds aren't the same but complement each other.
Patrick, with a voice that moves from whispering to a roar, sings more of personal angst; Tim mixes a bit of social commentary in with his romantic mishaps, a bit like a young Billy Bragg.

No free cake this time, but there was lots on the menu - and tea and coffee being served all night (something to console the designated drivers)


Sadly, there wasn't much of a crowd, but I'm hoping that hasn't put them off Derby completely and that they'll be back soon. Meanwhile I'm off to listen to their cds....

and on Bandcamp Tim OT
and Patrick Craig
Posted by maryom at 13:32 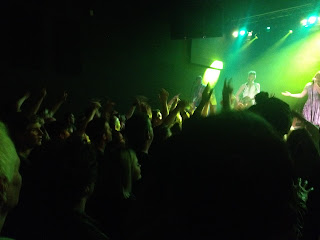