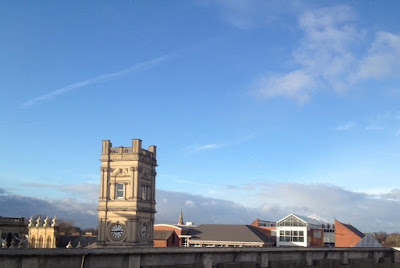 Earlier this week I went into Nottingham and unusually ended up at roof level of a multi-story car park - 14 floors up! OK in the grand scheme of highrise buildings it's probably not that tall but I'm used to three or four stories where I can walk back up to the car and not have to use the lift. I don't like lifts - they're small, enclosed, have too many people trying to cram into them, and they judder and jolt as they go up and down, so I normally avoid them. Anyway, when you're parked on the fourteenth floor there's not really an option, so I gritted my teeth, shut my eyes, took deep calming breaths, and I'm still here to tell the tale. 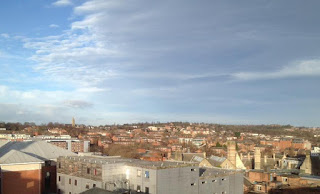 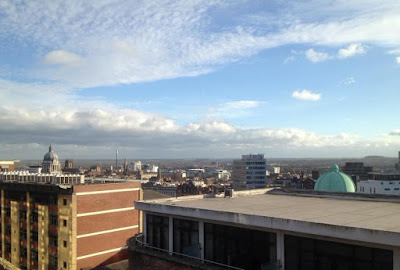 There was a rather unexpected plus point to this little adventure - the amazing view from the top.


If someone asked where you could get a good view of the city (any city really), your immediate response wouldn't be 'from the top of that car park' - but it was brilliant. 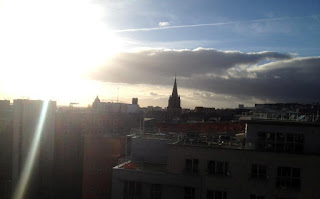 I could see all the way over the city to distant hills, spot the Council Hall dome in one direction, the cathedral (I think) and possibly the castle in the other (the sun was low and in my eyes so I wasn't certain) 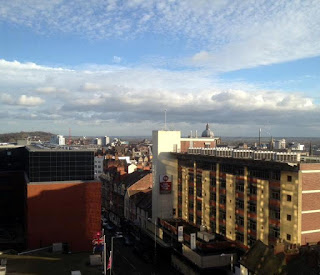 It almost made me want to sing and dance across the rooftops like Dick van Dyke and the chimney-sweeps in Mary Poppins. 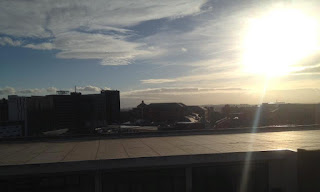 I'm not sure if this really qualifies as one of my new Sixty Things, but after all it's my game so I'll make the rules and include it. It's certainly somewhere I've never been before!
Posted by maryom at 10:34