My Top Tips for Visiting Edinburgh at Festival Time

I'm having one of those moments when social media is making me feel left out. Edinburgh Fringe festival kicks off today, Edinburgh International Book Festival next weekend, and I can't go. I'm going to be spending the month just looking through my old photos from past visits, and remembering how much fun I've had there, but for you lucky folks going, here are some tips - not the sort you'll find among the lists of  'Top Ten best shows to see at the Fringe', but an idiosyncratic list of  things I've learned over years of visiting... 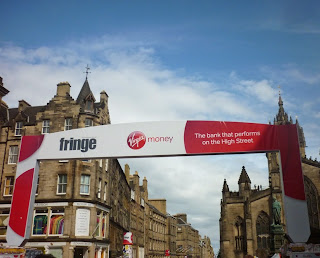 Get the Fringe guide - it lists every show that's on, tells you where and when, and if there's an age rating, and it's free! You can pick it up from the Fringe shop on the Royal Mile, and the Half-price Hut by the National Galleries, you might even be able to find it at some booksellers before you go, so you can plan your time (especially handy if you're only there a few days) 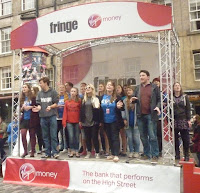 Next - find the map in the guide, plan what you're going to see, where it is, and how far from the previous/next show. Edinburgh can feel deceptively small but once you've walked down the Mile and then back up to the New Town, and south to the Meadows, it all starts to add up! Also allow more time than you think you need as the crowds can slow you down.

Give yourself time to just watch the street performances, from musicians to fire eaters there's something on almost all day, and personally I love hanging out at the section of the Mile where shows are handing out flyers. You can chat to the actors, find out if their show really IS your kind of thing, and again catch free street entertainment - be warned though, it's crowded.

If your party might be splitting up, watch your phone coverage. We've experienced problems in the past with trying to contact each other - it could be the old high-rise buildings but something seems to mess up signals.

Take time out to look up and see Edinburgh's fantastic architecture, or investigate some of the secret closes and wynds off the Mile - there are even peaceful gardens to relax in.


Head to Charlotte Square and the Book Festival - entry to the square itself is free, and you can either catch an event (there's something for all ages and tastes), grab something to eat and drink, or just sit in one of their deck chairs and play spot the author (and there are photos of them around so you can be sure who you've seen).

Visit the National Museum of Scotland - most of its exhibitions are free, there's often music at lunchtime during festival time, and the views from the roof are amazing!

There are lots of other museums to be visited, plus the Castle at one end of the Mile, and Holyrood Palace and the Scottish Parliament Building at the other, and the National Galleries - actually you could probably spend a whole week going round them all. I particularly like the National Trust for Scotland's Gladstone's Land, a restored seventeenth century tenement on the Mile near the castle.


If you've got any energy left, climb Arthur's Seat or go to the seaside. You might not realise but Edinburgh has it's own beach, at Portobello, easily reached by bus.


The only snag is - I now want to go even more!