The Only Way Is Indie - Books And Music

Do you ever find that sometimes you don't go out for weeks and then several things come along at the same time that you'd like to catch? It happened to me on Friday.
I'd already planned in a vague way to catch an independent publishing event at Nottingham Writers' Studio, then realised that a pair of singer/songwriters that I'd really like to see were performing locally the same night. Time to panic!
Then time to check venues and timings ..... almost unbelievably, the two events were taking place on the same street, literally opposite each other, and, with a bit of leaving early here and missing the opening act there, I could pull both in!

First over to, and underneath, Nottingham Writer's Studio for The Only Way Is Indie; Dr Teika Bellamy of Mother's Milk Books, and Sara Jayne Slack of Inspired Quill had brought together a panel of twelve, representing independent presses publishing anything from graphic novels to literary fiction, short stories to poetry. Picking up a book from an 'indie' you're not going to find something destined for the 'bestseller' list or a celebrity memoir - it's going to be quirky, maybe a little avant garde, possibly a debut novel from an unknown author who could turn out to be the year's big discovery (and then get snapped up by a larger publisher for their next book).  Besides hearing about what independent publishers have to offer authors, things that maybe the large publishers can't, it was a great opportunity to meet up with authors and publishers - some I've met before, some I'd only so far talked to over social media. There's a proper write up of the event on OurBookReviewsOnline but for me it was time to nip across the road ... to Bunkers Hill. 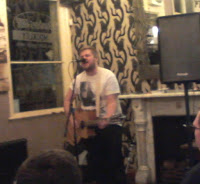 If you'd asked me a couple of weeks ago what or where Bunkers Hill was, I'd have had no idea. But then I heard on the social media grapevine that two of the guys I'd met through my daughter's music promotions  - Patrick Craig and Joe McCorriston - were going to be playing there, and I thought it was a great chance to see them again. The venue turned out to be, as I said above, just across the road from the book event, one of those pubs that advertise 'live music' on certain nights, and the 'stage' was a small area in one corner of the bar (No dartboard this time though) 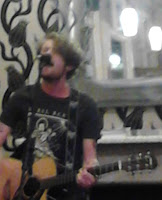 I always expected to miss the opening act, local singer George Gadd, but I was disappointed to have got my timings a bit out and missed the beginning of Patrick Craig's set ..... still it's a good excuse to go see him next time he's up from London, and I at least managed to catch the whole of Joe McCorriston's set. Both are singer/songwriters with a folk/punk vibe and were as good, if not better, than I'd remembered (though it helps that this time I hadn't been left in charge of collecting entrance money!). It was a really fun end to the evening and I'm glad I went along.

,
What struck me afterwards was the way in which both of the evening's events had been about going down an 'independent' route. In the same way that the independent publishers are investing in work that isn't mainstream, so are these musicians. Their music is their own, played and sung from the heart; not something shaped by management to fit what's deemed popular. Although both the bestseller lists and music charts have something to offer (though, please, not the latest formulaic thriller or boy-band song), there's a lot more variety to be found by looking a little beyond the obvious.